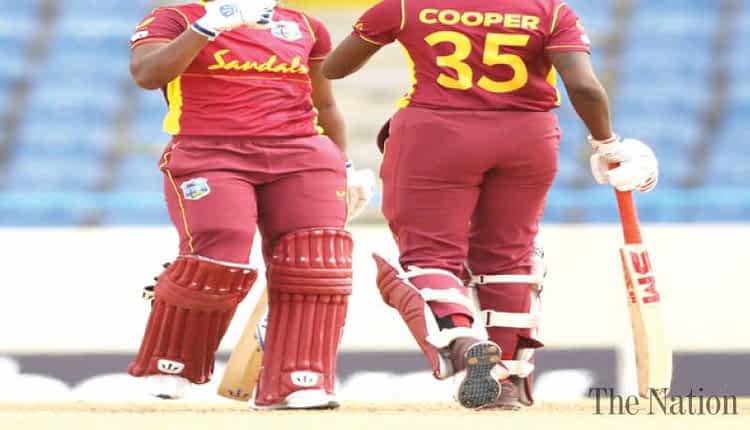 NORTH SOUND – Off the back of a brilliant hundred from Hayley Matthews, West Indies took out the third ODI against Pakistan to claim an unassailable 3-0 lead in the five-match series.

Electing to field first, West Indies bowled Pakistan out for 182 before making light work of the chase. Having taken 2/30 with the ball, Matthews scored an unbeaten 100 off 122 deliveries to guide West Indies to victory with eight wickets in hand and 59 balls to spare. The all-rounder dominated a 56-run stand with Kyshona Knight, with the latter perishing for 18 to finger-spinner Anam Amin (1/35) in the 12th over. The dismissal did little to knock the West Indies off course though, with Britney Cooper scoring a calm 45 off 68.

Matthews and Cooper put on 106 runs for West Indies’ second wicket, with the opener raising her half-century off 55 deliveries along the way. Cooper’s fall to seamer Fatima Sana (1/42) in the 36th over was the last moment Pakistan got to celebrate for the match, with Chedean Nation (13*) providing Matthews company as she reached her second ODI century to get the hosts home.

Earlier, West Indies captain Anisa Mohammed’s decision to bowl first proved correct as the bowlers put up another splendid performance. Although Pakistan openers Muneeba Ali and Ayesha Zafar began steadily and cautiously, they were only able to put up just 37 runs in 10 overs. Shakera Selman (1/24) provided West Indies with the first breakthrough with the wicket of Zafar (10) on the last ball of the 10th over. Muneeba (25) did not last for long either as she fell to Chinelle Henry (3/37) three overs later. Captain Javeria Khan became Henry’s second victim after a tame 22-ball 12.

At 56/3 Pakistan looked in dire straits but Omaima Sohail combined with Nida Dar to stabilise their innings. While Dar played the supporting role, Omaima kept the scorecard ticking, taking advantage of the bad balls. The duo put up a half-century stand before Matthews struck to remove Dar on 24. From 143/3 Pakistan slipped to 161/9, with a cameo from Rameen Shamim (19*) helping them to 182. Omaima was the top-scorer, making a 79-ball 62 before falling to Mohammed. Mohammed (3.25) and Henry (3/37) were the pick of the Windies bowlers with three wickets each, while Matthews got two wickets.