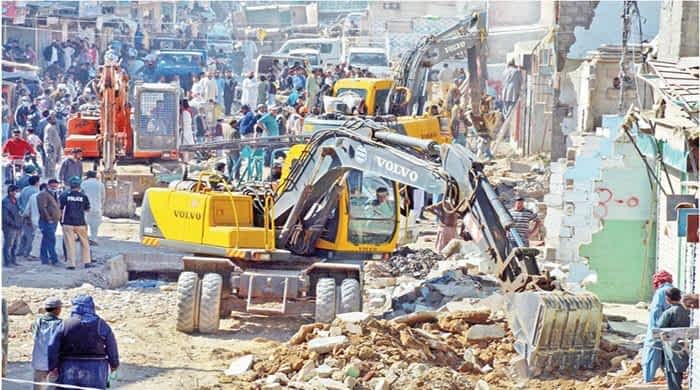 A little more than half a kilometre of the bank of Karachi’s Mehmoodabad Nullah was rid of hard encroachments as the second phase of the operation for clearing both sides of the storm water drain started on Monday.

Six or seven houses were partially demolished, while the rest of the residents of the locality were told to vacate their homes in two or three days. Last week’s four-day operation of the Karachi Metropolitan Corporation (KMC) saw the land on either side of the nullah cleared of all kinds of soft encroachments in the presence of a heavy contingent of police and other law enforcers.

Balconies of houses and other concrete structures were demolished along with the removal of soft encroachments such as cabins, kiosks, and tables and chairs of restaurants and tea shops, while the passage was cleared on both sides of the drain to make way for the KMC’s heavy machinery.

The KMC’s departments of anti-encroachment, Katchi Abadis, land, municipal services and city wardens took part in the operation on Monday that saw concrete structures razed in the locality.

A heavy contingent of police and other law enforcers was also present in the area. Supply of utility services such as gas and electricity to various shops, hotels and houses was disconnected ahead of the operation. Portions of shops and houses protruding over the road were demolished.

In a survey conducted by the KMC and the NED University, 57 shops and houses were notified in the seven-kilometre area of the Mehmoodabad drain for demolition because they were illegally protruding over the road, according to KMC Anti-Encroachment Senior Director Bashir Siddiqui.

However, he said, three or four houses will be completely demolished. He pointed out that the people who were going to be affected by the operation were given additional time to vacate the concrete structures.

Siddiqui said that heavy machinery was used in the area to demolish illegal structures on Monday. “After last week’s operation, in which soft encroachments were removed and their rubble was later relocated, a passage for the KMC’s heavy machinery was made for today’s [Monday’s] operation.”

He said the KMC will make every effort to restore the nullah to its original form. The original width of the drain is 50 feet, in the surrounding area of which the operation is being carried out. All the residents were notified about it beforehand.

After the operation, a 12-foot road will be constructed along with a three-foot footpath on both sides of the nullah. At least 15 feet of space will be available on either side of the drain after the operation.

Siddiqui said that the stairs, grills and walls of shops and houses that had been left during last week’s operation for later were demolished on Monday.

He said that out of the 57 notified houses, six or seven were partially razed. As for the rest of them, the KMC has given additional time of two or three days to vacate them, he added.

On Karachi Administrator Laeeq Ahmed’s orders, the KMC’s Works & Services Department is going to start construction and renovation at the strip from Mehmoodabad Road to Jigar Muradabadi Road.

The administrator had taken notice of the road’s dilapidated condition and directed the works & services department to repair it so it can be used by motor vehicles. Since the road gets traffic all day, one track at a time will be dealt with.

On Administrator Ahmed’s orders, the works & services department has started fixing street lights from the Shaheed-e-Millat Jail Chowrangi flyover to the Tariq Road underpass. The administrator had ordered carrying out these works as soon as possible in view of the problems being faced by the people.

The department claimed that the use of standard material was ensured for the functioning of the street lights and long-lasting results. According to Ahmed’s orders, the works are to be completed at the earliest, especially in the places that get more traffic.

He has also ordered the department to continue conducting their survey so that the roads and lights in need of repairs can be immediately fixed. He stressed that roads and street lights are the main components of the infrastructure.

The administrator said that it is essential to keep the current infrastructure intact before starting new projects. The people also want better green belts, roads and footpaths, he added.

DRAP board meets today to mull over approval of Chinese vaccine