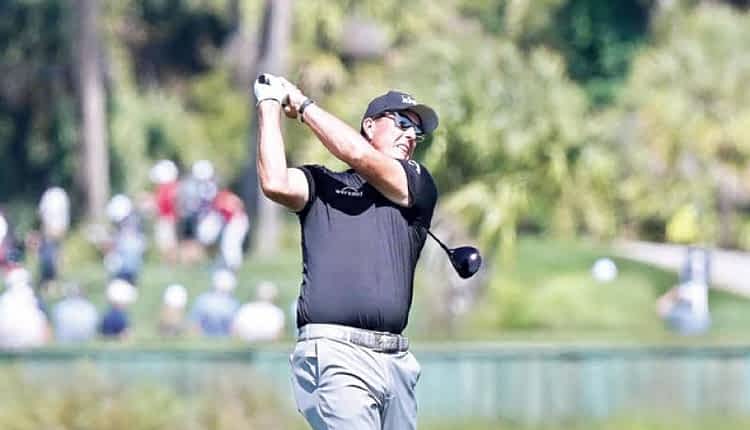 American left-hander Mickelson, who could become golf’s oldest major champion, and Oosthuizen, the 2010 British Open winner, were deadlocked atop the leaderboard on five-under 139 after 36 holes on the formidable Ocean Course. “I’m heading into the weekend with an opportunity and I’m really excited about it,” Mickelson said. “If you told me (I was leading) Sunday night, I’d really enjoy it. Right now, there’s a lot to do.”

Oosthuizen, who birdied five of the first 12 holes, nearly fired the first bogey-free round of the week but missed a nine-foot par putt at the 18th to shoot a four-under 68. “It has got to be up there as one of my best,” Oosthuizen said of his round. “It was tough. I’m just glad I was striking it really good.”

With a victory, Mickelson would erase the age mark set by American Julius Boros when he won the 1968 PGA Championship at 48. Mickelson birdied five of his last eight holes, closing with a 23-foot birdie putt at the ninth to shoot 69 as a Covid-19 limited crowd of about 10,000 roared in delight. “It’s really fun to make a putt on the last hole and have a round like that,” Mickelson. “The support here has been really special.”

Four-time major winner Brooks Koepka, playing with pain after right knee surgery in March, eagled the par-5 seventh and 11th holes but made two bogeys in the last four holes to shoot 71 and stand third on 140. “It was definitely a difficult day. It was tough to make putts,” Koepka said. “(Knee) feels fine. I’m four-under. It’s all there.”

Masters champion Hideki Matsuyama, trying to complete the first half of a calendar Grand Slam, closed with a bogey to shoot 68 and stand on 141, sharing fourth with South Africans Christiaan Bezuidenhout and Branden Grace. Grace, who holed out from 70 feet to birdie the 10th, plunked a tee shot into the water at the par-3 17th on the way to a double bogey-bogey finish to shoot 71. “Just trying to stay alive out there,” Grace said. “It was such a grind.”

Oosthuizen, 38, has had a runner-up finish in all four majors since his lone victory at St. Andrews 11 years ago. He went 25 consecutive holes without a bogey, highlighted by a 33-foot birdie putt at the fourth, before stumbling on a course that humbled many top golfers. “I played really well, hit the golf ball well, putted nicely,” Oosthuizen said. “I got a lot of opportunities. I just played really solid.” It was the first time since 2008 at Oakland Hills that there were no bogey-free rounds at a PGA through 36 holes.

Dustin Johnson fired a 74 to stand on 150, one over the expected cut, and should become the first world number one to miss consecutive major cuts since Greg Norman in 1997 at the Masters and US Open. Johnson missed the cut in last month’s Masters defending his green jacket win last November. Also set to miss the cut after back-to-back 75s was second-ranked Justin Thomas, who could have overtaken Johnson for the top spot with a victory.

Reigning US Open champion Bryson DeChambeau fired a 71 to stand on 143 while defending champion Collin Morikawa shot 75 to stand on 145. Four-time major winner Rory McIlroy, who won the 2012 PGA at Kiawah, closed with three consecutive bogeys to shoot 72 and finish on 147, the same score as third-ranked Spaniard Jon Rahm and England’s Justin Rose. Three-time major champion Jordan Spieth, trying to complete a career Grand Slam with a victory, fired a 75 for 148.