Mingling of Iranian and Pakistani cultures through art 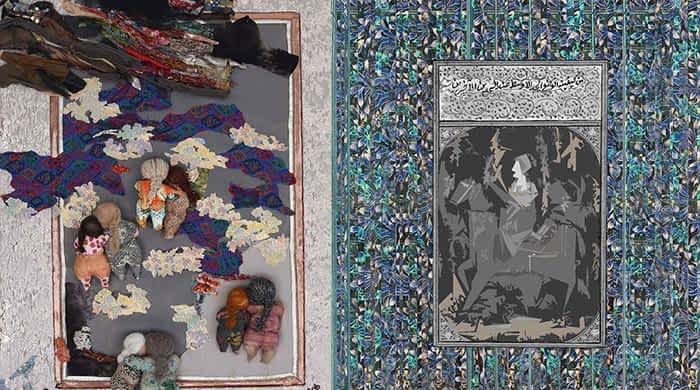 Literature has the power to refine or establish language, shape our understanding of history, and define culture and society, and so does art. Artists are therefore termed as ambassadors of the country they belong to. In a group show titled “Common Borders” at Sanat Gallery, Karachi consisting of Pakistani and Iranian artists, the artists shared cultural and social points of view of their respective countries through their creations.

Curated by Majid Abbasi Farahani of Farahani Foundation Common Borders – Chapter 1 showcases works by 10 artists belonging to Pakistan while Chapter 2 of this project will showcase pieces by artists from Iran. Both parts of the project will first be exhibited in Pakistan and will be followed by a joint exhibition in Iran.

Having a common border, Pakistan and Iran’s relationship is deeper than the lines demarcating their lands. Reading between the (cartographer’s) lines, the artists showcasing in “Common Borders” examined the relationship between Iran and Pakistan within the context of their shared histories, cultures, and literature.

One of the cultural commonalities is an Iranian epic poet Hakim Abolghasem Ferdowsi and his significant work, Shahnameh. This project is planned according to Shahnameh and artists from Pakistan and Iran have been invited to participate creating an amalgam of a cross border exhibit.

This exhibition brought cross-border communities together encouraging social and cultural interactions between the artists. They carried out an investigation of the relationship between Iran and Pakistan throughout our histories.