More restrictions to be imposed if people continue to defy SOPs, warns CM 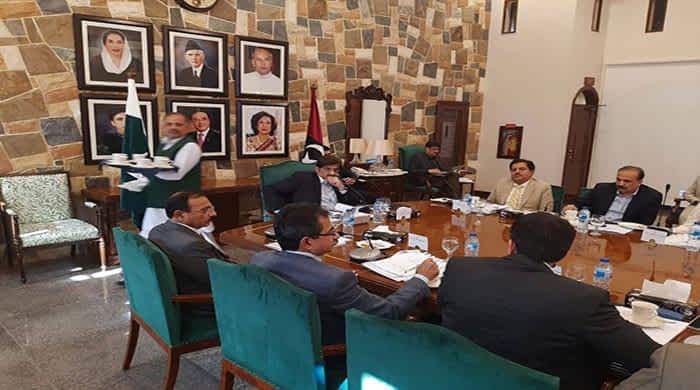 Extension of restrictions related to Covid-19 in Sindh for two more weeks was inevitable as the detection rate for the disease has been constantly on the rise in Karachi and other major cities of the province, due to which three major hospitals in Karachi have no more room left for the Covid-19 patients.

Sindh Chief Minister Syed Murad Ali Shah said this on Sunday as he addressed a news conference at the CM House. “In such a situation when the cases of coronavirus are on the rise and the death rate is also showing an upward trend, relaxation in the restrictions could not be considered. We may impose more and strict restrictions if the people continue to defy the SOPs [standard operating procedures],” said.

Accompanied by Sindh Health Minister Dr Azra Pechuho, Education Minister Saeed Ghani, Irrigation Minister Sohail Anwar Siyal, Law Adviser Murtaza Wahab, Dr Abul Bari of the Indus Hospital and Dr Faisal Mahmood of the Aga Khan Hospital, the CM said Eidul Fitr was celebrated on May 24, 2020, last year and on that day, there were 846 new cases but within 15 days after the Eid, the number of daily new cases had increased to 3,036 on June 11, 2020, which constituted a 30 per cent detection rate.

“This year, Eidul Fitr was on May 13, 2021 and on that day, we had 1,232 cases and within eight days [May 22], the number of cases increased to 2,135. Our hospitals, particularly the Infection Disease Institute, Indus and Aga Khan have no beds for Covid patients,” he said.

Talking about the PCR tests, Shah said that after Eidul Fitr, 2,809 tests had been conducted per a million population because the government wanted to assess the situation to make an appropriate strategy. He added that during the last one week, the positive cases ratio had been recorded at 8.37 per cent, which was quite dangerous.

The CM remarked that when Ramazan started, the ratio of the positive Covid cases was lower in Sindh than other provinces. As the month of Ramazan passed, the number of cases went on increasing because inter-provincial transport kept plying and moving passengers from one province to the other.

“Had it [transport] been banned for two weeks as was suggested by the Sindh government, the pandemic would have been contained,” he said. He added that marriage halls, expo halls, parks, indoor gyms, sports facilities, amusement parks, cinemas, beauty parlours, shrines and all tourist spots had been closed for two weeks starting Monday.

“All the educational institutions, including schools, colleges and universities, have been closed all over Sindh till further orders,” he explained and added that the transport vehicles were allowed with 50 per cent occupancy of their capacity.

Shops, including supermarkets, would operate from 6am to 6pm, Shah said. “We would not allow supermarkets to operate under the pretext of having a pharmacy,” he said, adding that pharmacies at hospitals and separate medical stores would operate round the clock.

The restaurants would offer only takeaways and home delivery service, he stated.

The CM urged the people of the province to get vaccinated. “The whole world is opening because they have vaccinated their people,” he said, adding that the government had been running 234 vaccination centres all over the province from where people could get themselves vaccinated against Covid-19.

The speakers also dismissed rumours regarding magnetic powers in the body after the vaccination. “This is something to misguide the people,” it was said. Dr Bari said the UK variant of the novel coronavirus was quite dangerous as it affected people intensely. He added that people could make themselves secured through vaccination.

Dr Qaiser Sajjad of the Pakistan Medical Association said more restrictions should be imposed until the spread of the virus was contained. He suggested that every day at least 500,000 to 600,000 people should be vaccinated. At the outset of the press conference, the CM also condemned the Israeli and Indian terrorism in Palestine and Kashmir respectively.

Solid measures to be taken for curbing child labour: CM