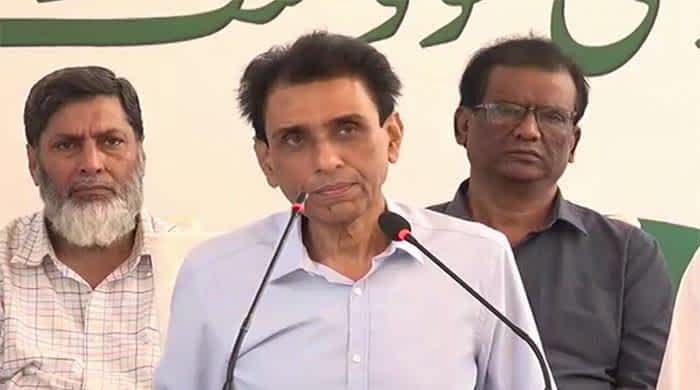 The MQM claimed that the ethnically biased and corrupt provincial administration has already financially crippled the city’s municipality and has been taking over the resources of urban Sindh under various pretexts for the past 13 years.

Addressing a news conference at the party’s headquarters in Bahadurabad on Saturday, senior MQM-Pakistan leader and MPA Khawaja Izharul Hasan alleged that because of the Sindh government’s biased policies towards the urban population in Sindh, localities in the urban centres of the province are turning into ruins.

“Corruption and bad governance have been reigning in the province, sometimes through biased legislation, sometimes through corrupt bureaucracy, sometimes under the shield of the 18th amendment,” said Hasan, who is also a member of the party’s coordination committee.

He claimed that through the summary sent to the chief minister, a conspiracy has been hatched to take over the KIHD and the KMDC. “We want to make it clear that these two health educational institutions are showing the best performance within their resources.”

He said the KMDC is transparent in every field from admission to administrative matters, and this is acknowledged by all the independent institutions in the country.

He alleged that the corrupt PPP government is using the 18th amendment as a weapon to misappropriate the resources of Karachi and Hyderabad. “For completing their corruption, the government is now eyeing the two institutions and harming the youth of the two major urban centres of the province.”

He said that intentional blunders in the examinations of the Sindh Public Service Commission (SPSC) are part of the provincial government’s efforts to deprive the youth of the urban centres of government jobs.

Hasan also condemned what he described as serious irregularities in the recent direct appointment of deputy superintendents of police, and demanded a high-level investigation into the recruitment process. “The SPSC has lost its credibility and its members are corrupt.”

He believes that the Sindh government has been using the 18th amendment as a weapon to grab resources and commit corruption, saying that the PPP betrayed the national leadership while drafting the 18th amendment. MQM leaders Abdul Qadir Khanzada, Zahid Mansoori and Khalid Salman were also present on the occasion.

Officials had revealed on Thursday that Sindh’s health department has forwarded a summary to the CM for the handing over of the KIHD to the National Institute of Cardiovascular Diseases (NICVD) to turn it into a satellite centre of the NICVD.

“Comments and opinions from the law and local government departments are being sought before the acceptance of the summary and the issuance of the notification,” said a health department official.

Comprising 170 beds, the KIHD was established by former Karachi mayor Naimatullah Khan to provide cardiac-care facilities to the residents of the Central and East districts. It started functioning in June 2005.

However, its condition and services deteriorated as the KMC, which financially supports the health institution, also started facing financial constraints, resulting in the deterioration of services at the KIHD.

The health department official said that technically, the summary recommends handing over the KIHD to the Sindh Institute of Cardiovascular Diseases (SICVD), which was established by the provincial government in 2019.

The official explained that this was done because of the apprehension that Karachi’s three major hospitals, which include the NICVD, would be handed over to the federal government following the Supreme Court’s decision.

“The summary moved to the provincial chief executive says the KIHD should be made the headquarters of the SICVD. But after a recent development in the Council of Common Interests meeting, it is hoped that the NICVD and the other two hospitals would remain under provincial control.”

He said that if the NICVD continues to be managed by the Sindh government, the KIHD would work as one of its satellite centres just like several others that are currently working in Hyderabad, Tando Muhammad Khan, Mithi, Nawabshah, Sehwan, Larkana, Sukkur and Khairpur.

NICVD Executive Director Prof Nadeem Qamar also confirmed that the health department has recommended to the CM that the KIHD be handed over to them to be turned into a satellite centre. He said that once the KIHD is handed over to them, they will start providing state-of-the-art cardiac care.

“Former city mayor Wasim Akhtar wanted us to take over the KIHD and had made several requests, but we couldn’t do so without the provincial government’s approval and the provision of a separate budget,” said Prof Qamar.

“Now, once the provincial government notifies that the KIHD has been handed over to us and a separate budget is allocated, we’ll start running it like we’re managing eight other satellite centres throughout the province.”

He said that the KIHD was a purpose-built cardiac-care facility, most of whose doctors, surgeons, technicians and nurses had been trained at the NICVD. The technical staff of the KIHD will be offered refresher courses to bring them on a par with the staff of the NICVD.

“We have also requested the authorities to give us at least three months to bring the KIHD to our standards. We’ll continue providing emergency services while renovating and equipping the facility in those three months, while all major procedures and surgeries will be carried out at the NICVD before making KIHD functional as our satellite centre.”