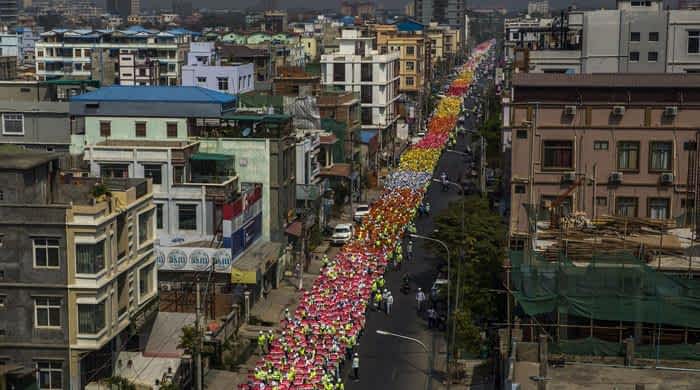 The photographer, who remained unnamed for security reasons, scooped the Visa d’Or for News, the most prestigious award handed out at the “Visa Pour L’Image” festival in Perpignan, southwestern France.

Mikko Takkunen, the Asia photo editor for The New York Times, collected the prize on behalf of the photographer.

Myanmar has been in turmoil since the military seized power in a February 1 coup, with near-daily protests and a huge civil disobedience movement.

“He is probably the strongest photographer in the country. He is extremely happy and honoured to win this prize,” Takkunen said.

Takkunen said the photographer dedicated the prize to his peers in his country who are working under extremely difficult conditions.

Across Myanmar, more than 1,000 civilians have been killed in the ongoing military crackdown, according to an advocacy group.

The press has been squeezed as the junta tries to tighten control over the flow of information, throttling internet access and revoking the licenses of local media outlets.

The anonymous photographer said in a message that he was “on the streets every day since February 1.

“I encountered many difficulties, working between bullet shots, tear gas and deafening grenades.”

“On the ground, we stopped working with helmets marked PRESS as we realised the soldiers were targeting photographers,” he said.

Among the others nominated was Greek photographer Angelos Tzortzinis from AFP for his work on the last days that migrants and asylum seekers spent at the Moria refugee camp on the island of Lesbos, which was cleared after devastating fires.

Also nominated was American Erin Schaff from The New York Times for photographs depicting the storming of the US Capitol in Washington.

Indian Danish Siddiqui from Reuters was nominated for his work on the health crisis following the coronavirus pandemic in his country.

Siddiqui was killed in July while covering fighting between the Taliban and Afghan forces.

Snake becomes celebrity after biting a student in Brazil