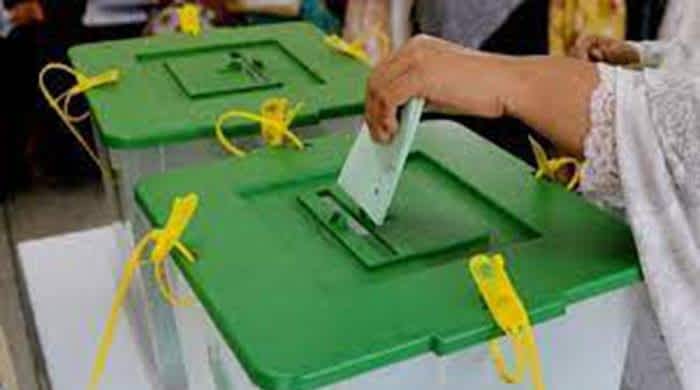 Nominees representing major political parties of Pakistan had been involved in hectic electioneering in the run-up to Thursday’s by-poll for NA-249, one of Karachi’s most ethnically diverse constituencies. Voter turnout on the big day, however, was unexpectedly and disappointingly quite low.

The voting process began at 8am and continued until 5pm without any break at the 276 polling stations comprising 796 polling booths established in the constituency. The NA seat had fallen vacant after the PTI’s Faisal Vawda had resigned following the casting of his vote in the Senate elections in March.

The 2018 general elections had seen a close contest in NA-249, with Vawda securing 35,344 votes to defeat the PML-N’s candidate and former Punjab chief minister Shahbaz Sharif, who had polled 34,626 votes.

The TLP’s Mufti Abid Mubarak and the MQM-P’s Aslam Shah had ranked third and fourth after bagging 23,981 and 13,534 votes respectively. The Muttahida Majlis-e-Amal’s Syed Ataullah Shah had ranked fifth by securing 10,307 votes, while the PPP’s Qadir Mandokhel had polled a mere 7,236 votes to rank sixth in the competition.

In the by-election, a major contest was witnessed between the PML-N, the PPP and the TLP. The PML-N had fielded Miftah Ismail, former finance minister and the party’s provincial general secretary, and managed to secure the support of the Awami National Party, the Jamiat Ulema-e-Islam-Fazl and the Jamiat Ulema-e-Pakistan.

The TLP, which was banned by the Ministry of Interior for carrying out violent protests across the country this month, had fielded Mufti Nazeer Kamalvi. The PTI had fielded its district president Amjad Afridi.

The PPP had again fielded Mandokhel, and succeeded in gaining the support of the Majlis-e-Wahdat-e-Muslimeen. Mustafa Kamal, former city mayor and the PSP chief, was also in the electoral fray, while the MQM-P had fielded Mursaleen Ahmed for the by-poll.

Despite strict security measures in place, the voter turnout was reported to be low. Political parties and analysts have linked the low turnout to Ramazan, the scorching heat and the rise in Covid-19 cases.

According to Geo News, one of the areas saw a mere 10 per cent voter turnout, while it was reported to be between 10 and 12 per cent at some polling stations. To ensure a large voter turnout, the Sindh government had declared a public holiday for the NA-249 constituents. The Election Commission of Pakistan (ECP) had deployed special staff for the strict implementation of the coronavirus guidelines during the polling process.

During the voting process, the ECP issued expulsion orders directing the PTI’s parliamentarians to leave the constituency for violating the code of conduct by being present there during polling hours, and instructed the police to expel them.

The provincial election commission turned down the request of the PML-N and the party’s candidate Ismail to extend the polling hours, Geo News quoted sources as saying. They said the electoral body was unable to find a solid reason to extend the voting process beyond 5pm.

In a letter addressed to the provincial election commission, Ismail requested facilitating the voters fasting in the hot weather by extending the polling hours. He said the overall working efficiency of all the presiding officers and their teams had been “very slow” and affecting the voting process.

“Concurrently, majority of the voters also arrived at the polling stations late in the afternoon due to their fasts and the hot weather conditions,” he said.

No major untoward incident occurred during the polling process, as strict security arrangements had been made by the law enforcement agencies for the NA-249 by-election.

Rangers soldiers and police officials were deployed to deal with any situation, with 1,685 police officials tasked with security duties in the West and Keamari districts. One hundred commandos from the Special Security Unit and 100 of the Rapid Response Force were also deployed at different spots.

A suspect was arrested for trying to give cash hidden in a file to the presiding officer. At least one other suspect was taken into custody. Their political affiliations are yet to be disclosed.

There was some tension at two polling stations, where workers of two political parties came face to face and shouted slogans at each other. However, Rangers and police officials brought the situation under control.

John Legend urges people to get COVID-19 vaccine: ‘This is our shot’

Another subdivision of District Central locks down