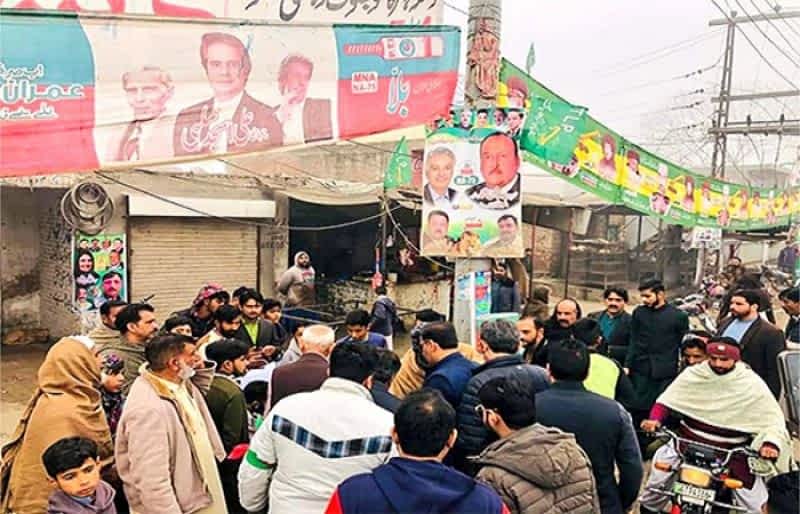 Two persons died and eight others were injured as clashes broke out between PTI and PML-N workers in the city’s NA-75 constituency on Friday.

The firing incident occurred at the Gondka polling station which resulted in three persons getting injured, with two succumbing to their injuries on the way to the hospital.

A heavy contingent of police officials and Rangers personnel are present at the Gondka police station to restore order there. PTI and PML-N workers had assembled outside the polling station where the firing incident took place, shouting slogans against one another.

Two groups of people exchanging blows, armed with sticks in Daska can be seen in a video clips that have gone viral on social media. Police have yet to identify or arrest the suspects who were committed the killings.

According to sources, PML-N’s thug Javed Butt murdered PTI worker Majid by firing at him and severely injured Sajid,” tweeted Dr Shahbaz Gill. “The PML-N is full of goons such as Gullu Butt and Javed Butt. These are criminals, politics is just a cover-up. Every drop of blood will be accounted for,” he added.

The city’s traffic situation worsened because of the clash. The atmosphere outside the polling station remains tense as no law enforcement agency remained present outside the Gondka polling station where the firing incident took place and where currently charged-up workers of both political parties are face-to-face.

Awan lashed out at the ECP, saying that it seemed as if the commission “had its eyes closed” today. “Those officers [of the ECP] who operated outside of the law today, we have our eyes on them,” she warned.

The PTI leader vowed that the provincial government will “neither leave the PTI nor its facilitators” for the Daska chaos.

Soon after news broke of the clash between workers of both political parties, the PML-N and the PTI leaderships held each other responsible for the violence.

She alleged that PTI workers were being harassed at polling station by “private gunmen”, calling on police to take action against the culprits.

On the other hand, PML-N vice president Maryam Nawaz lashed out at authorities and tweeted a video of the party’s supporters breaking doors of a polling station down after they were allegedly made to wait outside for hours.

“PMLN voters in Daska lose patience, protest & break down doors of a polling station after being made to wait for hours as polling time draws to an end. Sharam kero,” she tweeted.

PML-N spokesperson Marriyum Aurangzeb lashed out at the PTI, blaming the party for resorting to violence in the face of imminent defeat.

The PML-N leader said that she would request the ECP to extend the voting time in the area and added that the party will demand the commission to hold an inquiry into the firing episode.

Later, holding a press conference, Aurangzeb said that both PTI and the PML-N workers had been martyred in the incident. “Two people are dead and four persons are severely injured,” she said, blaming the whole provincial government and the administration for being in cohorts with the culprits who had opened firing.

“Where is the chief minister of Punjab? He says an FIR will be registered. You should be booked in the FIR,” she lashed out. “This provincial government can’t hold one by-election.”

She continued her tirade against the chief minister, saying that he had failed in holding a by-election in Daska. “You have made the administration your personal servants,” said Aurangzeb.

PTI leader Usman Dar questioned Sanaullah’s presence in the constituency, saying that it was a clear violation of the ECP’s code of conduct.

“We will register an FIR against Rana Sanaullah. He brought armed men with him and resorted to firing,” he accused. “If these people thing NA-75 is their stronghold, what are PML-N MPAs and Maryam Safdar doing holding jalsas in the area?” he questioned.