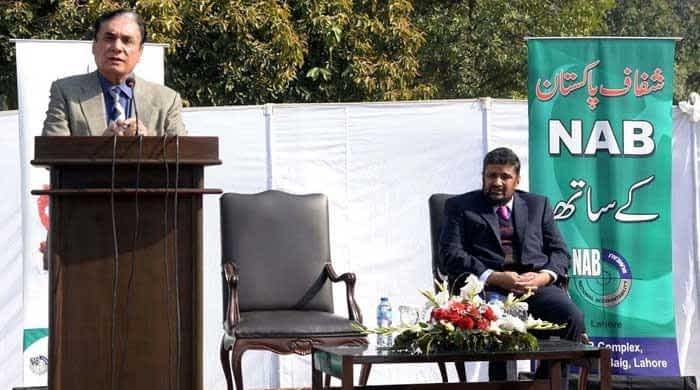 National Accountability Bureau (NAB) Chairman retired Justice Javed Iqbal on Wednesday urged people to understand the difference between NAB custody and judicial custody, saying that the watchdog is not responsible for deaths in jail.

He expressed these views after distributing cheques of Rs760 million among 3,000 affectees of Model Housing Enclave and Ferozpur Housing Society.

‘Record recoveries made in two years’

Appreciating the performance of NAB Lahore, Iqbal said that distribution of millions of rupees — recovered from suspects in a short span of two years — among affectees is laudable.

“When NAB’s history will be recorded, today will be remembered because in only 24 months, Rs2.5 billion worth of recoveries were made.”

He said the joy  on the faces of the affectees had proved that NAB officials were “serving the nation by utilising their energies to return hard earned money to the affectees”, adding that an amount of Rs1.32 billion was also returned to the affectees of other housing society projects during the last two years.

Iqbal said that the authority is aware of the importance of the business community and would never take steps to violate their rights.

He said he has always “safeguarded the interests of businessmen” and NAB is aware that businessmen are the backbone of any economy. “Why would we take a step that would violate the rights of a businessman then?”

Iqbal added that the stock exchange would not show a positive trend as it has been, if NAB was creating problems for the business community.

‘NAB only acts on authority given’

The NAB chairman said the Bureau is striving hard to ensure complete implementation of the rule of law.

Iqbal, responding to criticism about the authority allegedly pressuring people to enter into a plea deal said: “It is not as if the chairman or the DG is abusing his authority. This has been given to NAB by the law and is being excercised accordingly.”

He said those who only criticise NAB must know that criticism must have “some foundation”.

The Bureau chairman said that some elements try to engage in propaganda against NAB but despite that, the Bureau will continue to work “purely on merit”.

Iqbal said that criticism for the sake of criticism is not justified and there should always be constructive criticism.

The NAB chairman said the watchdog has to undergo the accountability process as well as soon after arresting a suspect, he is produced before the court where on the basis of evidence, remand is granted.

He said that for robbery or murder, a 14-day remand is more than enough.

“But for white collar crime, that begins in Lahore, then it is shifted to Islamabad and then to Khaleeji states and then it is found that firms are bought in the US or in a few other countries, even if we were to continuously travel by air in these 14 days, the probe would never be complete.

He said that the court does not issue a 90-day remand all at once. It is always granted after “a lot of effort, hard work, investigation and convincing the court”.

NAB has put in place special measures to eliminate corruption without any discrimination and such steps will continue, he maintained.

Earlier, during his visit to NAB Lahore, the combined investigation teams led by DG NAB Lahore briefed him pertaining to mega corruption cases.