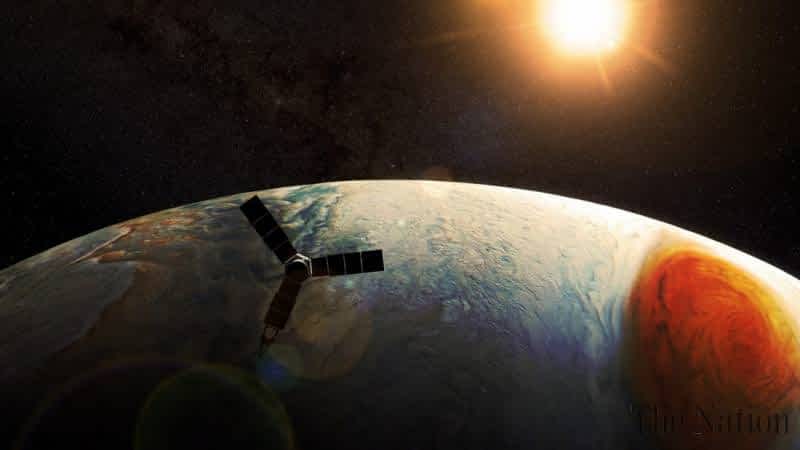 Planet Jupiter’s radio waves were discovered in 1955, and over the past 66 years, increasingly more discoveries have been made, offering a luring glimpse into how the signals operate.

A mission extension has been granted by NASA to the Juno programme, shortly after the spacecraft, which has been orbiting Jupiter since 2016, spotted a unique FM signal, presumably originating from the planet’s moon Ganymede. No such detections were previously picked up from the largest and most massive of the Solar System’s moons.

According to the sources of NASA’s Jet Propulsion Laboratory, the robotic explorer is now due to continue its mission to accumulate data about the largest planet in our Solar System and its dozens of moons, at least until September 2025 or when it stops functioning.

Investigations will be expanded to the larger Jovian system, which includes Jupiter’s rings and large moons, which present particular interest as some are known to have water (particularly Europa). In 2015, NASA’s Hubble Space Telescope spotted evidence that Ganymede has an underground ocean.

The latter discovery places the moons on a short-list of most-likely places in the Solar System for primitive life to be found.

“Since its first orbit in 2016, Juno has delivered one revelation after another about the inner workings of this massive gas giant. With the extended mission, we will answer fundamental questions that arose during Juno’s prime mission while reaching beyond the planet to explore Jupiter’s ring system and Galilean satellites,” stated Scott Bolton of the Southwest Research Institute.

Radio emissions around Jupiter were originally detected in 1955, launching extensive studies by researchers.

However, a milestone radio emission coming from one of Jupiter’s largest moons, Ganymede, was observed by Juno for five seconds while it was flying by at 50 km per second, or 111,847 mph. The waves were detected in magnetic lines linking Ganymede to the polar regions of the gas giant. The findings were published in the scientific journal Geophysical Research Letters.

As much as UFO hunters would prefer to explain the signal as being connected with some alien reality, the phenomenon is considered to be the result of electrons amplifying radio waves, in a process called cyclotron maser instability (CMI).

“It’s not E.T. It’s more of a natural function,” NASA spokesperson Patrick Wiggens was quoted by KTVX in Utah as saying.

The phenomenon is related to the physical process, albeit a shorter one, that causes auroras to happen on Earth.

“Electrons spiraling in Jupiter’s magnetic field are thought to be the cause of the radio noise we hear,” elaborated NASA.

The Juno spacecraft was launched to Jupiter in 2011, tasked with exploring how the planet formed and developed over time, with the cutoff date for the mission set at 2021.

The now-extended mission includes 42 additional orbits of Jupiter, as well as incorporating flybys of its moons Ganymede, Io, and Europa.

Juno is on schedule to pass low over Ganymede on 7 June 2021, subsequently hurtling towards Europa.

Polar cyclones at the poles of Jupiter will be studied at length, and NASA hopes to take the first-ever detailed study of the faint ring system encircling the planet.

“The mission designers have done an amazing job crafting an extended mission that conserves the mission’s single most valuable onboard resource — fuel. Gravity assists from multiple satellite flybys steer our spacecraft through the Jovian system while providing a wealth of science opportunities,” said Ed Hirst, Juno project manager at Jet Propulsion Laboratory (JPL).