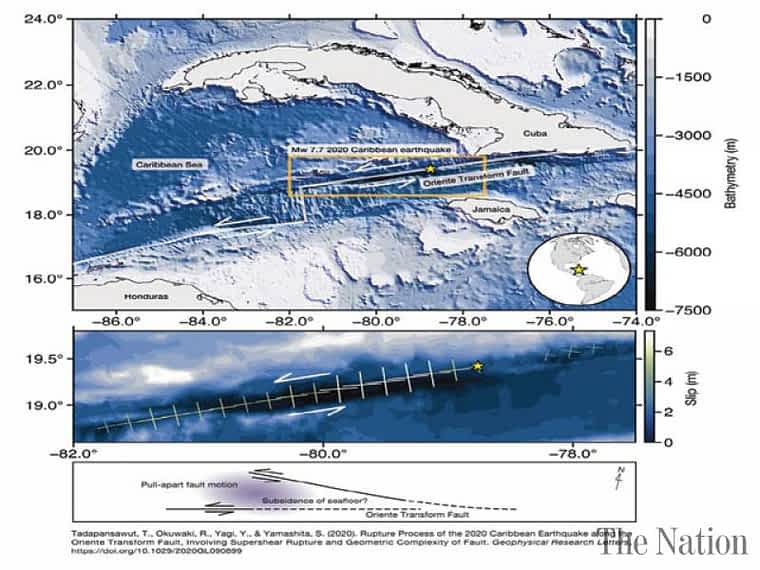 ISLAMABAD-University of Tsukuba researchers have developed a state-of-the-art model, which has revealed major complexity in rupture processes even in simple oceanic faults. Researchers from the University of Tsukuba applied seismic data from around the world to build a model of the 2020 Caribbean earthquake. Oceanic transform faults are generally considered to be linear and simple and have been widely used in studies of earthquake dynamics. However, the research team found that high complexity in rupture speed and direction can occur even in a supposedly simple linear fault system.On 28 January 2020, a large oceanic earthquake with magnitude 7.7 occurred at the Oriente transform fault in the Caribbean Sea, between Jamaica and Cuba. It caused a minor tsunami of 0.11 m height and was felt as far afield as Florida. A research team at the University of Tsukuba have developed a new finite-fault inversion method for building models based on teleseismic waveform data from earthquake monitoring stations. This new approach to using the data takes a more flexible approach to resolving the fault geometry. Rather than relying on prior assumptions, the faulting components are separately evaluated in a wider model in both time and space, allowing all possible rupture evolutions to be considered.

The team were keen to use the Caribbean earthquake to help to understand the faulting processes that occur during these shallow oceanic quakes.