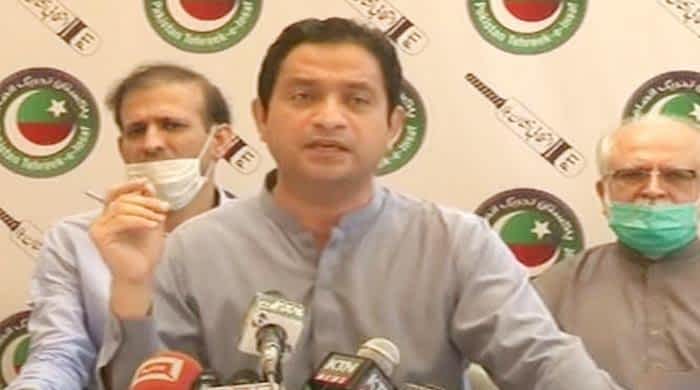 KARACHI: PTI MPA Khurram Sher Zaman has accused the Sindh government of financial embezzlement, alleging that funds provided to the province from the NFC award were being used transferred to Dubai and Canada.

The PTI MPA was responding to Sindh CM Murad Ali Shah, who had taken aim at the Centre, alleging that it was depriving Sindh of is fair share of water and revenue.

Tensions between the PPP and the Centre have risen over the past couple of days, with both sides blaming each other for  issues that Sindh faces.

He said the federal government had taken responsibility for cleaning Karachi’s drains, lamenting that maintenance of law and order as well as cleaning drains was the provincial government’s job.

He turned his guns towards CM Sindh Murad Ali Shah.

“Murad Ali Shah says [the Centre] did not provide us [Sindh government] Rs62bn,” he said, adding that the Sindh chief minister should inform the masses about his performance.

Zaman alleged that funds released by the federal government for Sindh as part of the NFC award were being transferred to Dubai and Canada. The PTI leader said Sindh had been provided Rs1,800bn.

“Who will account for that money?” he asked. “Grounds, parks, ambulances and roads. All are in an abysmal state. Murad Ali Shah is [only] raising the slogan of ‘Pesay Khappay’.” he said.

The PTI leader said he was expecting the chief minister to announce the provincial government’s move to issue health cards for the public. He expressed disappointment, instead, at the chief minister’s media talk.