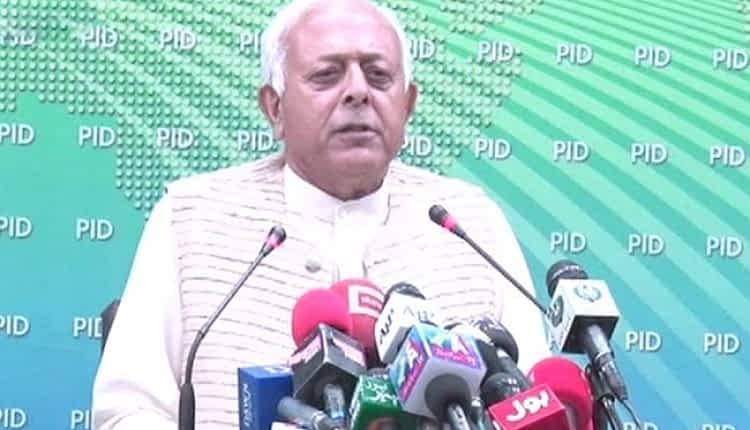 Federal Aviation Minister Ghulam Sarwar Khan on Monday categorically denied that he or his family had any links with the housing societies from which the government acquired land for the Rawalpindi Ring Road (RRR) project.

He made the comments during a press conference in Islamabad in which he said he and his family would “leave politics for life if it is proved that even one marla from the starting point to end point [of the RRR] belongs to me, my brother, my son, or any member of my family”.

Khan said he would issue a defamation notice to the person who had levelled allegations against him and challenged him to prove that land acquired for the project was ever taken, sold or kept by the minister.

“A lot of politicians and bureaucrats have linkages with [housing] societies. People from the journalist community have linkages too. I do not have any linkage. My family has no linkage with any society or any monetary benefit [from a society].”

Khan’s comments came days after Prime Minister Imran Khan ordered an inquiry into the RRR project scam after which the Punjab government decided to send the case to the Federal Investigation Agency (FIA) or the National Accountability Bureau (NAB) for thorough investigation.

The decisions were taken after two fact-finding reports — one by the Rawalpindi commissioner and the other by the deputy commissioner — landed in the prime minister’s office, with the second report hinting that the project had been realigned with the approval of Punjab Chief Minister Usman Buzdar and his finance adviser Dr Salman Shah.

However, the opposition PML-N demanded action against the relevant authorities for approving the ring road’s realignment, asserting that neither CM Buzdar and PM Khan nor “direct beneficiaries” such as cabinet members Khan and PM’s aide Zulfi Bokhari must be exempted.

PML-N deputy secretary general Attaullah Tarar had alleged both Bokhari and Khan had got huge financial benefits through the ring road project because their lands were near the project.

In his press conference today, Khan said that he would issue a defamation notice to the person who had “used such language against me and my family”. He added that he was ready to face all allegations if the person approached the courts with documentary evidence though it was unclear whether he was referring to PML-N’s Tarar or journalist Imran Khan who the minister claimed had “made the [RRR project’s] alignment a scandal and made an effort to link him with it”.

“We have no connection to [change in the project’s] alignment. We have no financial stake in any society. The alignment has not been changed on our whim,” he emphasised.

Talking about the inquiry committee that investigated the scam, Khan said that the report finalised by the convener of the committee — the Rawalpindi commissioner — had not been endorsed by two members of the four-person committee who submitted a separate report.

“The inquiry report sent by the convener to the chief minister, on which the CM [and] provincial government took action, was controversial,” he claimed.

“When one or two members dissent and send a separate report, it has no purpose. It becomes controversial. This inquiry is controversial and this inquiry report has no credibility at the highest forum.”

The minister said he would raise the matter in a meeting of the federal cabinet tomorrow and would ask for a “re-inquiry”.

He said the Ring Road project had been under consideration for a long time and neither of the two main opposition parties — PPP and PML-N — had been able to implement it despite coming to power thrice.

Khan recalled that an alignment for the project was finalised in 1970, according to which the starting point was near Rawat while the end point was the Thalian Interchange after which the traffic would emerge on the motorway. However, the National Highway Authority (NHA) had reservations and said the alignment was not “technically feasible”, he added.

He said he suggested in a meeting regarding the project that the right of way of motorways be utilised at which the NHA said that it would “cost heavily” because housing societies had sprung up on the sidelines of both the M1 and M2 motorways.

“No political personality has any kind of connection with the alignment. If the alignment has been changed, it was because of purely technical reasons which only the technical people can describe.”

Talking about journalist Imran Khan’s YouTube show, the minister said he “strongly condemned the implication” that the petroleum portfolio was taken from him due to a scandal and the effort to link him with the RRR project’s alignment.

Khan said there could be a “personal connection with a house or an individual” in a housing society but denied there were any financial links.

He said his name was not included in the inquiry committee’s terms of reference or in the reports themselves but it was “fed by somebody”, adding that he was also trying to find the elements who had given his name.

He shared that he had met the prime minister before Eidul Fitr and stressed that the RRR project was a “flagship project” of the PTI and “should not become a victim of controversy and should not be put on pending”.

“This is a project of Pakistan and it will be a political advantage will be for the PTI,” he added.

More lives may be lost in future if railways’ upgradation is not carried out:…