Normalising ties with India at this point will be a betrayal of Kashmiris’ trust: PM Imran Khan 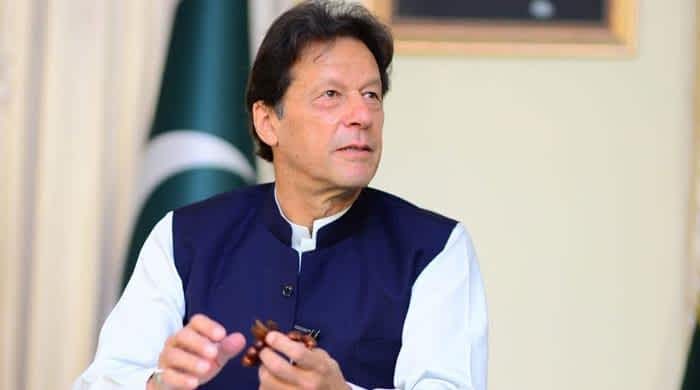 Prime Minister Imran Khan answering a query from a caller, on live television, on May 30, 2021. — Twitter/@PTIofficial

Prime Minister Imran Khan on Sunday said that normalising ties with India given the current situation would be a betrayal of the trust and sacrifices of Kashmiris.

The prime minister said these words while responding to a query from a Rawalpindi caller on live television.

The prime minister took calls from people from 4pm-6pm, which were broadcast live on television, radio and digital media.

This was the fourth time the prime minister interacted with the people via telephone calls.

What role is Pakistan playing in the Palestine and Kashmir crises?

Answering a query on what role Pakistan is playing in the Palestine and Kashmir crises, the prime minister said he would like to speak about Kashmir first.

“There is no doubt that if we have good relations with India — and on the other hand we have such a big market when it comes to China — if we begin trade and there is greater connectivity, its a proven fact that trade benefits all,” he said, also citing the example of when the European Union was formed.

He said he tried his best the very first day in power to improve relations with India and to sort out the Kashmir issue through dialogue.

But with the way the situation is right now, if we try to normalise relations with India, it will be akin to stabbing the people of Kashmir in the back, said the prime minister.

He said all their sacrifices and their struggle — more than 100,000 have been martyred — will be sidelined.

“So this cannot occur. We stand in solidarity with Kashmiris. We know of the kind of sacrifices they have made and continue to make.”

The prime minister said that if India takes back the steps it took on August 5, “then we can definitely hold talks” and build a road map to sort out the Kashmir issue.

Moving on to the Palestine crisis, he said events that have just begun to unfold in Kashmir, such as the occupation of land and settlements by the people of India, have been ongoing in Palestine for a while, reducing it to a small country.

He said this cycle of Israeli forces’ oppression on Palestinians, leading to protests and then the use of barbaric force in response will continue.

“There are two things that can happen. Either ethnic cleansing, when Muslims and Jews were expelled from Spain […] which cannot be allowed. Or a two-state solution, a homeland for the Palestinians,” said the prime minister.

He said with the hue and cry being witnessed on social media, where the world has woken up to the cruelty the Palestinians are being subjected to, the winds are blowing for the latter to occur.

‘PDM will not be able to win, come what may’

The prime minister said that if the Opposition’s objective was aligned with the welfare of the people, “they would have toppled the government a long time ago”.

“But their interests are personal in nature. They have banded together not under any ideology or for the country, but simply because they want to blackmail us into taking back the corruption cases against them — which had been in place even before we came into power,” the premier said.

He said that they consider the people fools, who have been watching their wealth grow since the past 30 years.

“Those who had cycles, now roam about in Land Cruisers. Those who had a cycle business, now have apartments in London’s Mayfair and do not own cars any lesser than Bentleys and Rolls Royces.

“They reside in London neighbourhoods where even the British prime minister cannot afford to live. And Britain’s yearly revenue is 50 times that of Pakistan’s with a population only 30% of the size of ours,” the prime minister said.

He said they really “do not know the people of Pakistan”, if they think that the people will latch on to their narrative and help them get an NRO.

“They had not fathomed that we would come out of this economic crisis. And now that they see the predicted growth and the economic indicators which are on the right path, they are again trying to [stage some drama] and I know they will try to pull something off during the budget.

“But they will not be able to win, come what may.”

A caller from Badin complained of water shortages in the province, with the “Sindh government deflecting the blame on to the Centre”.

Responding to him, the prime minister promised that the government, over the course of the next 10 years, will build 10 dams, as it is water storage that will enable the country to deal with the needs of the burgeoning population.

This will enable the government to distribute the water to provinces on a fairer footing as well, he said.

He regretted that the telemetry system that indicates how much water is going to each province is “just not working”, but the government is working on having these placed everywhere.

PM Imran Khan also said distribution within provinces is also a problem, with farmers unable to get the share of water they should.

He said it is the responsibility of the Sindh government to ensure that the powerful do not take away the share of poor farmers.

“If the presence of Rangers, like an MPA from Sindh has requested, is required, we will provide that as well,” the prime minister said.

The prime minister also spoke of illegal housing societies, for which a committee has been formed that will ascertain which ones need to be shut down and which ones have been developed to an extent that they cannot be pulled down. The owners will instead be fined and the society regularised.

He said robust legislation will be brought to criminalise building such societies.

Speaking of the Rawalpindi Ring Road project, he said it is integral to the revamping of the city and will feature a business district on Nala Lai.

He said he had learnt of the road being narrowed down to serve the interests of certain parties and a fact finding mission confirmed that this was true.

“A powerful anti corruption team is working on this now and in the next two weeks, we will have our findings.

“Now a straight path will be laid out, instead of the roundabout 20-26km path that had previously been chalked out to benefit certain people,” he said.

The prime minister said that Pakistan has witnessed record agricultural yield this year, against anyone’s expectations.

The premier said that now, with the use of technology, the government aims to have farmers directly benefit from the yield by eliminating middlemen, “as we saw in China”.

The farmers’ produce will go to retailers directly, he said, adding that virtual markets will be established for the purpose.

He said a problem that farmers face is getting rid of their crop quickly as they are not adequately equipped to store it. “Now we will build 900 storage facilities so farmers can store the crop easily.”

The prime minister said that better transportation so the quality and freshness of the crop is retained, will also be developed.

Health card not being recognised by hospitals

A caller from Lahore shared her concerns regarding the lack of implementation in Punjab of the health card facility.

The prime minister said that Punjab has yet to “become used to it”.

PM Imran Khan said that in Khyber Pakhtunkhwa, where it was first introduced, Rs10bn worth of claims have been entertained. He said that people in KP have been provided Rs1 million on each card which they can utilise at any facility.

Moving on to Punjab, he said the facility has so far been extended to two divisions, Sahiwal and DG Khan, and will reach all other divisions by year’s end. He said in Punjab Rs730,000 has been attached to each card, but if more funds are required by a family, the Punjab government will extend this by Rs300,000.

He said hospitals in smaller towns do not attract doctors, because it is perceived that no one will have the funds to come and seek treatment there. The health card, therefore, will attract the private sector to establish hospitals as even the poor will be equipped with funds to seek treatment.

PM Imran Khan added that in the upcoming budget, private sectors will have the facility to import medical equipment that is not available in Pakistan duty-free.

He said the health card, along with the duty-free import facility and furthermore, the sale of land belonging to Auqaf Department, Evacuee Trust Property Board and Railways at cheap rates will ensure a network of hospitals to be laid out across the country and will usher in a new era of health infrastructure.

Answering the query of a caller who said that the people are fed up with the way the police functions in Punjab, he said that it is easier to establish a new institution. “Bringing reforms to old institutions is one of the most difficult things,” the prime minister said.

Citing a 1993 report by the late Inspector General Abbas Khan submitted to the Lahore High Court, he said it stated that 25,000 officers were inducted into the force completely ignoring merit. “And the most horrific thing was that many were hardened criminals.”

“When the police will be used for bad things […] and in Punjab you can see how many were used for extrajudicial killings, then they become accustomed to doing bad things on their own.”

The prime minister said that the government is working to correct this and since Punjab is a bigger province and the status quo has been in place for 30 years, it will take some time.

“People will soon praise the Punjab police like they praise the force in Khyber Pakhtunkhwa,” he said.

The premier assured one caller, who is an overseas Pakistani and whose house has been illegally occupied since she left the country, that his team will look into the matter.

He encouraged her to use the citizen’s portal to file a complaint, also stressing that other people with similar complaints do the same.

The prime minister further said that with satellite technology, all land records will now be computerised which will make it hard for land grabbers to illegally take over any property.