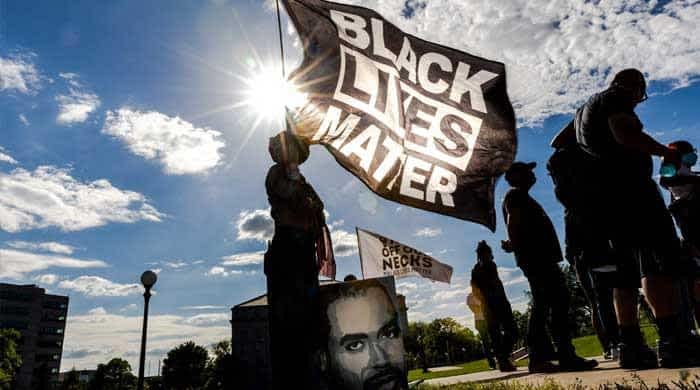 A woman holds a Black Lives Matter flag during an event in remembrance of George Floyd and to call for justice for those who lost loved ones to the police violence outside the Minnesota State Capitol on May 24, 2021 in Saint Paul, Minnesota. -AFP

US President Joe Biden will mark the one-year anniversary of George Floyd’s murder by hosting his family at the White House to hold talks with them.

Floyd’s daughter Gianna, his mother, sister and brothers will be among those attending private talks with Biden, Press Secretary Jen Psaki said.

“The courage and grace of his family, and especially his daughter Gianna, has really stuck with the president,” she told reporters. “He’s eager to listen to their perspectives.”

The choking to death of Floyd in Minneapolis on May 25 last year and subsequent conviction of the officer, Derek Chauvin, who’d knelt on his neck for nearly nine minutes, were seen as seminal moments in the long US struggle for racial equality.

After the killing during Floyd’s arrest outside a store, protests and riots erupted across a country already crackling with tension from the election battle between Biden and then president Donald Trump.

In the wake of the verdict this April against Chauvin, who faces sentencing next month, Biden sought to build on political momentum by urging Congress to pass a far-reaching police reform bill in time for the first anniversary.

Americans must confront the “systemic racism” revealed by Floyd´s killing “head on,” he declared.

However, the ambitious deadline comes with only the House having passed the bill, known as the George Floyd Justice in Policing Act, while the Senate continues to wrangle over key details.

The bill seeks to reform what critics say have become ever more violent and unaccountable police forces around the country.

Opponents argue that police are being unfairly blamed when they are simply trying to operate in a dangerous and often heavily armed society.

However, Biden and reform proponents say that a culture of impunity and underlying racism have made incidents like Floyd’s death increasingly common.

Among other measures, the bill would ban potentially fatal restraint techniques used on suspects, like chokeholds.

It would also end so-called “no-knock warrants,” when police are authorized to burst into a suspect’s house unannounced — a volatile situation that led to the accidental killing of a Black woman, Breonna Taylor, in Louisville, Kentucky, in March 2020.

The most far-reaching of the measures that senators are still debating would be to end current legal protections that block civil lawsuits against police accused of misconduct.

Psaki put a brave face on chances of success, saying “the president is still very much hopeful that he will be able to sign the George Floyd Justice in Policing Act into law.”

While nothing is easy to get through the heavily divided Congress, Biden hopes that the energy unleashed in the wake of Floyd’s death will “help move this legislation across the finish line.”

“This anniversary serves as a painful reminder of why we must make meaningful change. While we are still working through our differences on key issues, we continue to make progress toward a compromise and remain optimistic,” they said.

For Biden himself, hosting the Floyds for a “real conversation” will be a moving moment, Psaki said.

George Floyd’s death was “a day that certainly impacted him personally and impacted millions of Americans.”