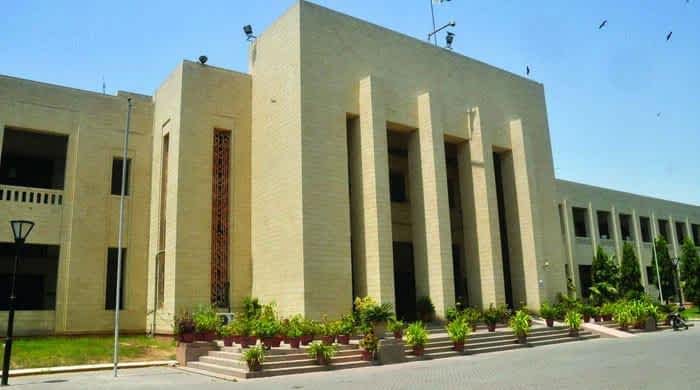 The opposition parties’ vociferous protest demanding that Karachi and Hyderabad be declared calamity-hit areas due to the adverse impacts of the continuing coronavirus lockdown did not let the Provincial Assembly of Sindh proceed at all with the day’s agenda on Tuesday.

PA Speaker Agha Siraj Khan Durrani was forced to abruptly adjourn the proceedings of the sitting soon after the House had been convened because the vocal protest by the opposition legislators caused a serious disorder in the assembly.

The trading of barbs between the lawmakers of the treasury and opposition benches of the House created a situation in the provincial legislature that seemed highly volatile. A tense situation prevailed in the PA during the brief sitting as the opposition legislators resorted to sloganeering for their demands and also surrounded the speaker’s rostrum. They also held placards inscribed with slogans in favour of the residents of the urban areas of Sindh.

The opposition was protesting for the second consecutive day after being denied the opportunity a day earlier to present a resolution to declare Karachi and Hyderabad calamity-hit due to the economic sufferings of the people of the two cities because of the continuing restrictions to curb the spread of Covid-19.

The resolution had been drafted by the lawmakers of the Muttahida Qaumi Movement-Pakistan (MQM-P), while their colleagues on the opposition benches from the Pakistan Tehreek-e-Insaf and the Grand Democratic Alliance supported the move.

MQM-P legislators insisted that their resolution should be given preference and permission should be granted by the chair to discuss it after deferring the regular agenda of the sitting. The party’s MPA Muhammad Hussain Khan said they had serious reservations about the continuing lockdown restrictions in the urban areas of the province, claiming the regime was being used to financially exploit the people.

The speaker told the opposition that he would run the proceedings of the sitting in accordance with the law and would not accept dictation from anyone.

Parliamentary Affairs Minister Mukesh Kumar Chawla said they would also stand in support if the opposition lawmakers had been protesting about the genuine issue of water shortage in the province. He said the opposition had not adopted the appropriate method to voice their issue.

He also appealed to the protesters to wear masks and comply with other safety precautions against the spread of the coronavirus. He also advised them to demand of the federal government to announce a relief package for the cities of the province.

Later, after the sitting’s adjournment, MQM-P legislator Kanwar Naveed Jameel accused the provincial government before the media of treating Karachi and Hyderabad as occupied territories, also claiming that traders were being robbed in the name of lockdown restrictions.

He said the opposition was constantly being denied the opportunity to speak on its resolution on the issues of Karachi and Hyderabad. He claimed that non-native policemen posted in Karachi had been treating the lockdown regime as an opportunity to increase their income.

He also said they had planned to voice the demand in the House to announce a relief package for Karachi, but the abrupt adjournment of the sitting did not allow them to do so. The MPA said they would continue protesting in the House, and advised the provincial rulers to consider Karachi and Hyderabad parts of Sindh. He said the two cities should not be treated like occupied territories. He reiterated that the opposition had serious reservations about Sindh’s lockdown restrictions.