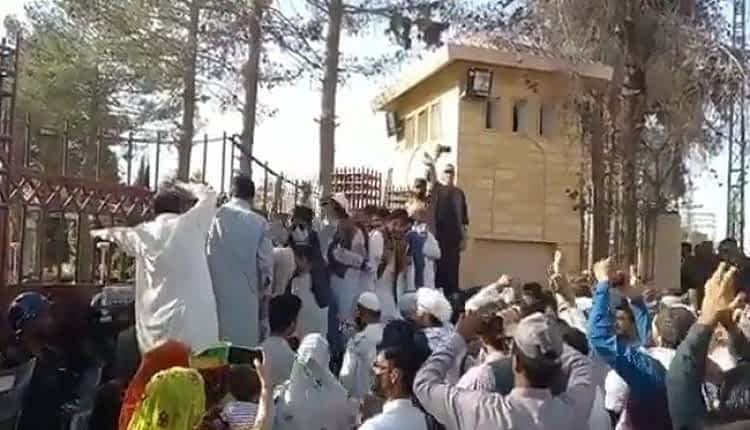 Chaotic scenes erupted outside Balochistan Assembly Friday as scores of protestors and Opposition lawmakers and supporters holding a protest outside the assembly were baton charged by police.

Police said Opposition lawmakers had locked all four doors of the Balochistan Assembly to prevent the budget session from taking place today.

The budget session commenced under the chair of Speaker Abdul Qudoos Bizenjo. Opposition MPA Nasrullah Zehray accused the police of using violent methods to disperse the “peaceful protest” outside the assembly.

Sana Baloch, another MPA, lashed out at the government, saying that the province was at its worst state since its inception.

He said lawmakers Abdul Wahid Siddiqui and Babar Rahim Mengal had been injured by the police’s armoured vehicle.

Earlier, the Opposition’s protest and clashes intensified, as per reports, when the chief minister arrived at the assembly.

The parliament had been convened today at 4:00pm to present the budget.

Clashes erupted when police arrived to the assembly gate at the MPA Hostel when Opposition lawmakers and police exchanged heated words.

Police had managed to open the doors of the assembly so that the government lawmakers could enter for the budget session.

Opposition has proven how ‘non-serious’ it is: Liaquat Shahwani

Speaking to Geo News, Balochistan Information Minister Liaquat Shahwani said the clashes had proven how ill-disciplined and non-serious the Opposition was.

“Assembly is a prestigious institution and they have attacked it. The same assembly whose members these people themselves are,” he said, attacking Opposition MPAs.

“They are doing this by design and deliberately,” he said. “They have proven they do not follow any democratic values and to protect their personal interests, they [Opposition] are ready to go to any length.”

Shahwani said if the Opposition was serious, it would have properly gone through the budget and recommended its suggestions.

“Have you heard their proposals or demands?” he asked. “This is the best budget in Pakistan’s hsitory and will be presented today,” he added.

He rejected reports that the Balochistan chief minister had been hit by a flower pot, adding that the Opposition supporters’ act of hurling objects was “shameful”.

“After this, they will not be able to even take the name of democracy ever again,” he added.

Supporters of Opposition parties have blocked national highways in several cities of Balochistan over the past four days. The Opposition has accused the government of ignoring development projects in the budget.

Opposition lawmakers had warned they would not let the provincial government present the budget on Friday.

Leaders of the Opposition parties, according to Dawn, said they would not allow any MPA to enter the assembly on Friday if their proposed development projects were not included in the provincial Annual Development Programme (ADP).