Over 5,000 cops to secure Karachi during Muharram 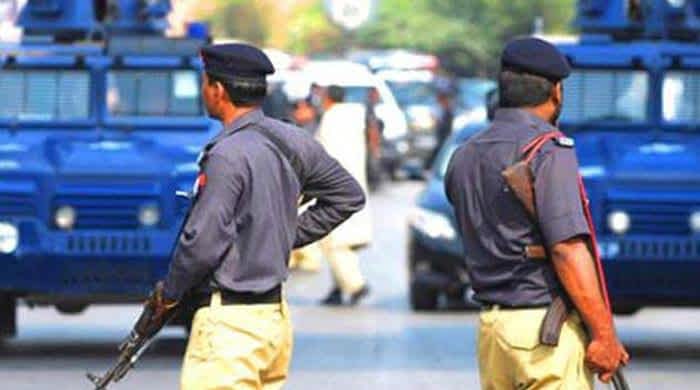 Five thousand and eighteen officials of the Karachi police have been deployed to provide security to mourners during Majalis and processions across the city, according to the announcement made after finalising the Muharram security plan on Tuesday.

Twenty senior police officers and 53 deputy superintendents of police will oversee the security duties while 832 non-gazetted officers, 4,000 head constables and 113 policewomen will be stationed along the routes of processions and at the venues of congregations.

According to the information shared with the police, 15,971 Majalis will be held across Sindh while 6,288 minor and 717 major processions will be organised in different parts of the province.

To maintain law and order and avoid any untoward incident, the provincial government has ordered a ban on pillion riding across Karachi on the 8th, 9th and 10th of Muharram. Mobile services are also likely to be disrupted along the procession routes and in the surrounding areas of Majalis venues in different parts of the city.

The roads leading towards the central processions on MA Jinnah Road will be sealed with containers and other barricades on the 9th and 10th Muharram, while the participants of the procession will enter by way of walk-through gates to be installed for securing the central processions. The authorities have also planned to monitor the processions through CCTV cameras while their aerial surveillance will also be carried out on the 9th and 10th Muharram.

He was accompanied by relevant officers of various departments during the visit. Barrister Wahab also visited the Kharadar Imambargah, and assured the organisers of full security during the Muharram procession. “Our first priority is to complete the development work as soon as possible,” he said. He met residents of the area and listened to their issues.

Earlier, the city administrator, accompanied by Managing Director Karachi Water and Sewerage Board Asadullah Khan, visited the Nishtar Park and met scholars and President Jaffaria Alliance Shabar Zaidi, and listened to their problems. The administrator and the water board MD assured them full cooperation. The deputy commissioner of District East, Asif Jan, and Younis Jaffer of the Jaffaria Alliance were also present on the occasion, who briefed Barrister Wahab about the situation.

In the Nishtar Park, the administrator himself reviewed all arrangements made for the Muharram gatherings, and ordered tightening the security arrangements.