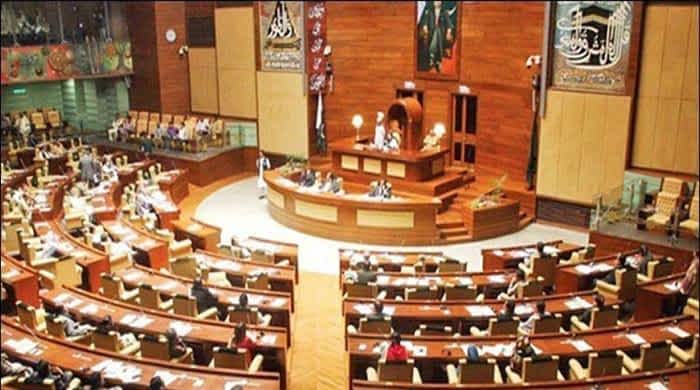 The proceedings of the Sindh Assembly on Monday were abruptly adjourned as the debate on a call-attention notice on the Sindh government’s action against its officers involved in plea bargain or voluntary return of money related to accountability cases created a ruckus in the House.

The treasury lawmakers belonging to the ruling Pakistan Peoples Party (PPP) and opposition legislators of the Pakistan Tehreek-e-Insaf (PTI) hurled accusations against each other during the discussion on the call-attention notice creating pandemonium in the assembly.

PPP MPA Sharjeel Inam Memon, who was chairing proceedings of the House as part of the panel of the chairmen of the session, failed to restore order and announced the adjournment of the session till January 25.

The call-attention notice in question was presented PTI legislator Arsalan Taj. The opposition MPA said that the House should be informed about the action taken by the provincial government against the officials involved in the plea bargain arrangement related to the accountability references.

He said that giving posting to the officials involved in the accountability cases was like providing them with undue benefits.

The environment in the house became tense when Sindh Parliamentary Affairs Minister Mukesh Kumar Chawla responded to the call-attention notice and said the people involved in stealing of sugar were seeking a response from the Sindh government.

He said that people involved in stealing of sugar and wheat flour were all available with the present federal government. “For what cause, your government has not been arresting the people involved in the sugar theft,” said the provincial minister while pointing towards the PTI’s legislators in the house.

“I will not mention the sewing machines as rather I’ll propose that sewing machines should also be given to all these members so that they could become rich,” said the parliamentary affairs minister.

The PTI lawmakers strongly protested in the house as one of the PPP MPAs, Imdad Pitafi, raised the slogan — “Baji chor hai, Baji chor hai [the sister is a thief, the sister is a thief]” — referring to Prime Minister Imran Khan’s sister without explicitly naming her. The resulting commotion in the house compelled Memon to abruptly adjourn the session.

Earlier, Sindh Women Development Minister Shehla Raza informed the PA during the question hour that no recruitment had been carried out in the provincial women development department during the last seven years despite the availability of several vacancies.

Shehla, however, said the Sindh government had lately accorded the approval for recruitment in the department and the same would be done in accordance with the appointment rules of the provincial government.

The provincial minister said that her department provided services of lawyers if women in distress required legal assistance in Sindh. PTI legislator Sidra Imran complained that the provincial government lacked the required workforce to properly run the women crisis centre.

Muttahida Qaumi Movement-Pakistan lawmaker Jawed Hanif urged the provincial minister to ensure that the daycare centres are established in every institution in view of the rising number of the female workforce.

MPA of Grand Democratic Alliance Nusrat Seher Abbasi suggested that a daycare facility should also be established in the Sindh Assembly. Speaker Agha Siraj Khan Durrani advised the legislator to move a resolution to this effect in the House.

Shehla also assured the PA that the women resource centre under the aegis of her department would be made fully functional again to provide the facility of a display centre for skilled women to showcase their talents..