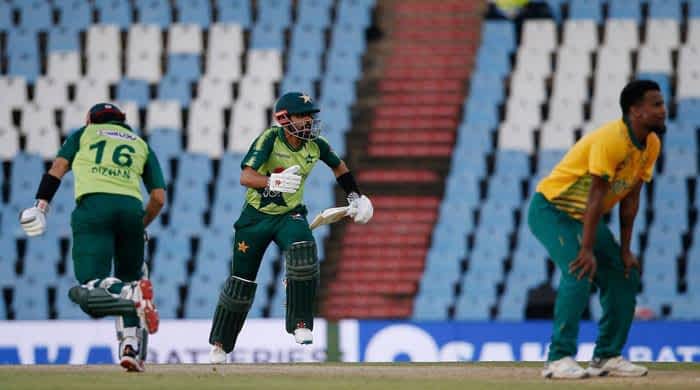 Pakistan’s captain Babar Azam and Pakistan’s Mohammad Rizwan run between the wickets as South Africa’s Lizaad Williams looks on during the third Twenty20 international cricket match between South Africa and Pakistan at SuperSport Park in Centurion on April 14, 2021. Photo: AFP

Pakistan will be eyeing a series win against South Africa, as the green shirts aim to go home with two trophies after they take on the Proteas in the final T20I at the Supersport Park in Centurion, today.

The home team, South Africa, will be hoping to keep Pakistan at bay and end their final game of the summer with a win and a series draw.

Pakistan’s captain Babar Azam is hoping that his team will be able to carry forward the momentum into the fourth T20I in the similar Centurion conditions.

In the last game, Pakistan captain Babar Azam and batsman Mohammad Rizwan ensured the visitors cruised to a 9-wicket victory over the Proteas.

Although South Africa set a massive 204-run target, Pakistan easily chased it with nine wickets to spare and took a lead of 2-1 in the four-match series.

Recalling his outstanding knock that saw Babar playing possibly the best T20 international innings of all time, the Pakistani skipper said he was waiting to score in similar fashion again.

South Africa will be hoping that in today’s game their fielding will rise to the occasion as they let the visitors off easily in the third T20I.