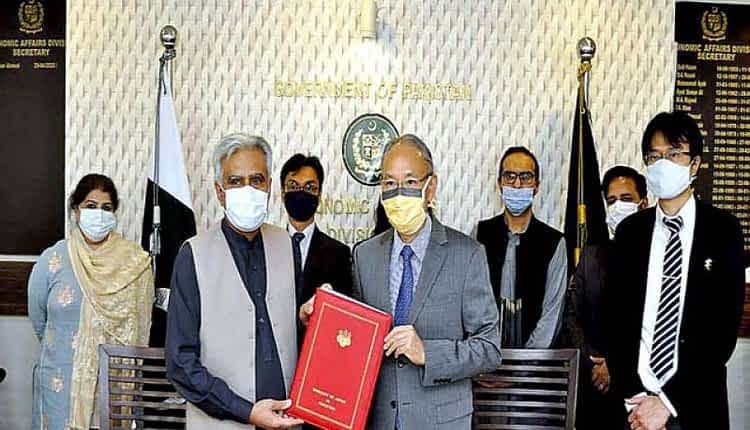 Noor Ahmed, Secretary of Economic Affairs Division, and Kuninori Matsuda, Ambassador of Japan to Pakistan, signed these agreements in Islamabad. The signing ceremony was witnessed by senior officials of Japanese Embassy.

In the wake of COVID-19, the G20 countries, together with the Paris Club creditors, announced a Debt Service Suspension Initiative (DSSI) to provide much needed fiscal space to stressed countries in order to meet their urgent economic and health needs. The Government of Pakistan, taking advantage of this initiative, entered into negotiations with 21 creditor countries for debt suspension amounting to US$ 1.6 billion under DSSI Phase-I (April – December, 2020). The Government of Pakistan will repay the suspended amount in 4 years starting January, 2022.

On this occasion, Secretary EAD, reiterated his appreciation for the debt suspension provided by Japanese government. He highlighted that Japan is the 2nd largest bilateral lender to Pakistan. He also thanked the government of Japan for its generous support for fighting against COVID-19 pandemic. He lauded that Japan’s timely support helped Pakistan save lives & livelihoods of millions during the testing times. He also acknowledged continued support of Japan for health, education, agriculture, infrastructure, disaster management and urban services including water supply, sanitation and waste management.

While speaking on the occasion, Ambassador Matsuda also reaffirmed Japanese support to Pakistan on issues of mutual interest. Japanese economic assistance has played and shall continue to play a vital role in the socioeconomic uplift of Pakistan, he added. Both sides reiterated strong commitment towards further expanding bilateral economic cooperation.

The concessional loans, which are subject to the debt deferral, have been utilized for infrastructure development such as roads, tunnels, power plants and grids, irrigation, water supply, drainage facilities in Pakistan from the early 1990s to the mid-2010s. These concessional loans have favorable conditions for Pakistan in terms of low interest rate, long grace and repayment period. Ambassador Matsuda said, “After the stability of Afghanistan is realized, I believe some of these projects must be a part of the connectivity between Pakistan, Afghanistan and Central Asia.” Under this agreement, repayments for the debt and interest due between May 1, 2020 and December 31, 2020 will be rescheduled after June 15, 2022.

Economic shock caused by the outbreak of COVID-19 has continued on a global scale. Japan provided Pakistan with direct support of USD 9.5 million and multilateral support of USD 7.41 million to contain COVID-19, as well as the quick delivery of diagnostic kits and non-governmental support, all of which were on a grant basis. International solidarity on the medical and economical front is necessary to fight against infectious diseases with no borders. Ambassador Matsuda added, “This agreement, which we signed, represents Japan’s solidarity with Pakistan on the economic front.”