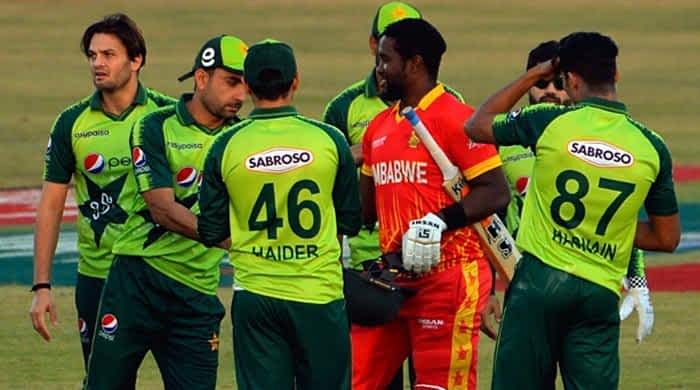 Players from both sides greet each other at the conclusion of the match. — PCB

RAWALPINDI: Pakistan made a clean sweep against Zimbabwe with an eight-wicket victory in the third and final Twenty20 International at the Rawalpindi Cricket Stadium on Tuesday.

In doing so, they retained their winning streak of 14 consecutive T20Is against Zimbabwe and consolidated their world record of winning the most matches against a particular country in T20I cricket.

Zimbabwe was defeated by six wickets in each of the first two T20Is, both played at the same venue.

Chasing 130, Pakistan completed their third successive victory in the series in just 15.2 overs.

Earlier, leg-spinner Usman Qadir’s magical bowling mesmerised Zimbabwean batsmen as they were restricted to a paltry 129-9  against Pakistan.

Batting first after winning the toss, Zimbabwean batsmen could not resist Pakistan’s pace and spin attack, particularly against the leg-break bowling of Usman, who captured four wickets for only 13 runs.

Among other bowlers, Imad Wasim claimed two wickets while Mohammad Hasnain and Haris Rauf took one wicket each.

Zimbabwe’s main scorers were captain Chibhabha (31) and Tiripano (28) whereas no other batsman could make any significant contribution.

Zimbabwe made two changes with Saudi Arabian-born Faraz Akram making his debut and Craig Ervine playing his first T20I this tour. Both have replaced Sikandar Raza and Richard Ngarava.

Pakistan made three changes with batsman Abdullah Shafique making his debut  and Imad Wasim and Musa Khan returning to the team.

Wahab Riaz and Mohammad Hafeez are benched, and Faheem Ashraf also sits out in the last game before Pakistan gear up for the Pakistan Super League, due to begin later in the week.