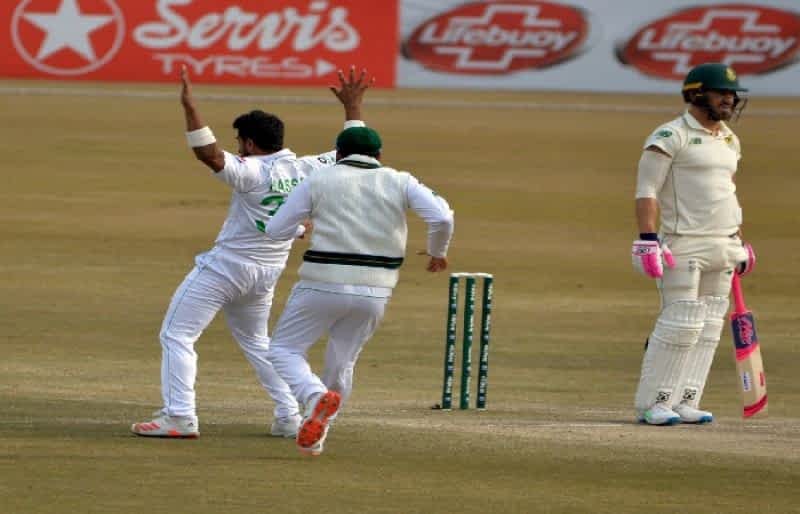 Pakistan started the final day of the Rawalpindi Test as they wanted, taking the wicket of Rassie van der Dussen in the first over moving closer to the historic victory on Monday.

Pacer Hasan Ali clean bowled der Dussen in his first over raising hopes of ending the series on a positive note.

Set a daunting 370-run target, South Africa finished the fourth day on 127-1 with Aiden Markram on 59 and Dussen unbeaten on 48. The tourists will need another 243 runs to level the series on Monday.

Earlier, Pakistan were helped to 298 all out in their second innings by a scintillating maiden hundred by wicketkeeper batsman Mohammad Rizwan who finished on 115 not out.

South Africa had lost opener Dean Elgar to fast bowler Shaheen Shah Afridi for 17 at the total of 33, before Markram and Dussen negated Pakistani spinners on a seemingly unresponsive pitch, having added 94 for the unbroken second wicket stand.

South Africa can take confidence from the fact that two targets of 300 plus have been chased in the last 20 days with India overhauling 324 against Australia in Brisbane on January 18 and West Indies scoring 395 against Bangladesh at Chattogram on Sunday — both on the last day.

Pakistan can take heart from the fact that no team has chased more than the 220 scored by Sri Lanka in 2000 in ten Tests in Rawalpindi, and that South Africa have not chased 250-plus since 2014.

“We need to build on this partnership (Markram-Dussen) as we know wickets can fall in cluster like the first Test,” said Nkwe. “The pitch is playing well so the guys need to apply themselves to get to the target.”

Rizwan said one wicket can open the door for Pakistan.

“Whenever we get one more wicket we are confident that we can catch them,” he said. “We need this win and we have spoken positively about it.”

It was Rizwan who gave Pakistan a sniff of victory.

He was at his best, putting on a match-turning 97-run partnership for the ninth wicket with number ten batsman Nauman Ali who made 45, frustrating the South Africans who were looking for a series-levelling win.