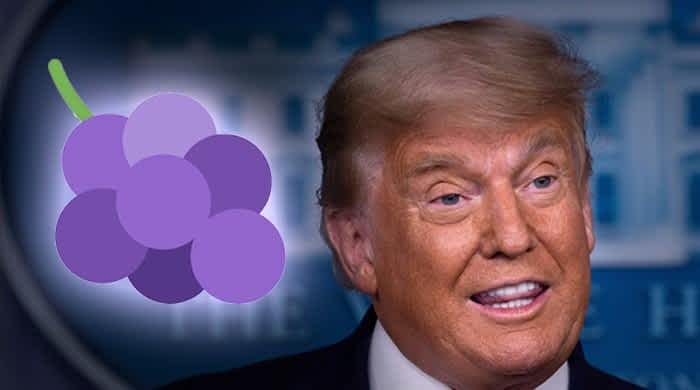 BACKGROUND: US President Donald Trump speaks at the White House in Washington, US, November 5, 2020. AFP/Brendan Smialowski

US President Donald Trump was told to “relax” by none other than the Pakistani politician who ended up becoming meme fodder due to her “Grape!” comment from her time in Saudi Arabia.

Sehar Kamran, a member of the Senate Forum for Policy Research (SFPR), trolled Trump as he was panicking over what may likely be his defeat in the US Election 2020.

The Pakistani politician had shot to fame when her remarks encouraging students during patriotic events at a Pakistani school in Saudi Arabia went viral. So popular were the memes that even some foreigners picked up her appreciative comments and used them in TikTok videos.

However, Trump — who seems to be losing to Democratic nominee Joe Biden — asked a question about mail-in ballots.

“How come every time they count Mail-In ballot dumps they are so devastating in their percentage and power of destruction,” the Republican president wrote on Twitter.

To which, the former lawmaker associated with the PPP told Trump to “relax” because “it happens” during times such as the US Election 2020.

Sehar Kamran’s comment was immediately reshared on Twitter and people spoke of how it may have become the best crossover of 2020.

Sehar Kamran has previously trolled Trump as well when Twitter flagged the Republican president’s tweet as “disputed” and “misleading”.