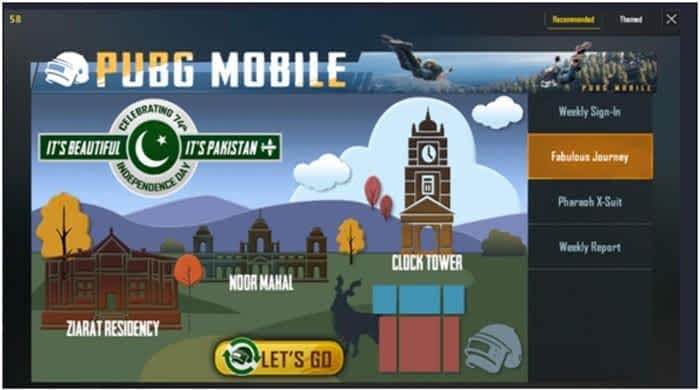 Titled ‘It’s Beautiful, It’s Pakistan’, the new PUBG event comes as a “token of appreciation for all the love and support shown by its loyal player base here in Pakistan”. The News/Handout

PUBG — which made headlines over the past few weeks due to Pakistan’s telecommunications regulator imposing a ban on the game and the courts ruling it be lifted — has introduced these locations on its mobile app. The exclusive event runs until August 24, 2020.

Titled ‘It’s Beautiful, It’s Pakistan’, the new event comes as a “token of appreciation for all the love and support shown by its loyal player base here in Pakistan”, according to a press release. It lets players “journey from one exemplary monument to the other, from the comfort of their homes”.

To add to the enjoyment of fans and players, it has also created a host of PUBG-themed wallpapers of Pakistan’s most iconic monuments. Among the locations are Quaid’s Mausoleum, Badshahi Mosque, Derawar Fort, Chitral and Hingol National Parks, Pakistan Monument, Noor Mahal, Clock Tower, and Ziarat Residency.

Titled ‘It’s Beautiful, It’s Pakistan’, the new PUBG event comes as a “token of appreciation for all the love and support shown by its loyal player base here in Pakistan”. The News/Handout

Here’s how fans can access and participate in the new event:

During the event, players must complete daily missions to collect PUBG MOBILE FlipsPlayers can secure 1 Flip for each mission that is completedPUBG MOBILE Flips can also be collected by playing the Daily Quiz which includes various interesting questions about PakistanEach day, 3 questions are to be answered, every correct answer will reward players with 1 PUBG MOBILE FlipOnce you collect Flips, players must go to the homepage and click on the active location to play Flip, Match and Win memory game using the PUBG MOBILE FlipPlayers can tap on any card to flip it and reveal the reward hidden behind itPlayers can flip the next card and if the reward on the second card matches that of the first card, the user wins the corresponding reward and also reveals the portion of the exclusive art of a famous monument/landmark in Pakistan that is hidden behind the cardsHowever, if the two cards don’t match, it will be turned back overEvery location has 6 cards, hiding 3 rewards in a pairPlayers must collect all the rewards on the current location and reveal the hidden monument/landmark completely to travel to the next locationPlayers can keep sharing the monuments/landmarks artwork with their friends on social media platforms in honour of our 74th Independence Day with PUBG MOBILE

Last month, after a lot of back-and-forth between the courts and the regulator, the Pakistan Telecommunication Authority (PTA) finally lifted a ban on PUBG after the company’s representatives assured it of addressing the concerns.

The decision came after fans expressed outrage on social media platforms. The regulator had argued that the online game was “highly addictive” and a “wastage of time”.

In its detailed, 11-page report, the body had underscored how the game was “destroying youth” and “has a negative impact on physical and psychological health”.

However, in its announcement of lifting the ban, the regulator said the company’s representatives had apprised Pakistani officials “on response to queries raised by PTA with respect to controls put in place by PB to prevent misuse of the gaming platform”.

“The Authority expressed its satisfaction on measures adopted by PB so far, and emphasized on continued engagement and a comprehensive control mechanism,” it had added.

“Keeping in view the positive engagement & response of the company, the Authority has decided to unban PUBG,” the PTA had said.

Pfizer says its vaccine shows 95% efficacy, plans to get emergency approval from FDA