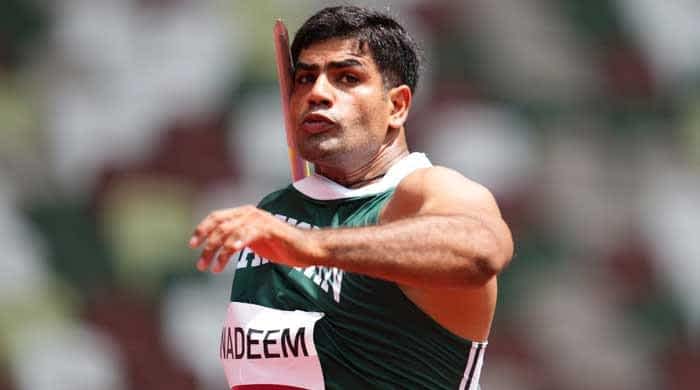 TOKYO: Pakistan’s athletic Arshad Nadeem made history on Wednesday when he qualified for the final of javelin throw competition in the Tokyo Olympics, Geo News reported.

Arahad Nadeem has become the first-ever Pakistani athlete to qualify for the final of any track and field event in the Olympics.

The Pakistani javelin thrower was placed in group B for the contest in which the athlete had to throw a minimum of 83.5m to directly qualify for the final. Only six athletes could do so, and Arshad was one of them while the rest of the six athletes advanced to the finals on basis of their respective farthest throw.

In his first attempt, the 24-year-old Pakistani athlete could reach the 78.5m mark but in the second attempt, Arshad created history with a throw of 85.16m that also placed him on top of group B.

This was overall the third-best throw in the contest after India’s Neeraj Chopra (86.65m) and Germany’s Johannes Vetter (85.64m).

This is also Arshad’s third-best throw in a competition.

Earlier this year, Arshad threw the javelin to a distance of 86.39m for his personal best and a national record during the Imam Reza championship in Iran. Earlier in 2019, he threw 86.29m at South Asian Games in Nepal.

So, one can safely say that Arshad’s best is yet to come and hope that the best comes at the final on 7th August, which is scheduled to commence at 4:00pm Pakistan time.

Pakistani athlete will also have his eyes on a medal on Saturday as he’s being considered as a potential hope to end the country’s Olympic medal drought.

Arshad’s main competitors will be India’s Neeraj Chopra and Germany’s Johannes Vetter. The fact that some of the best javelin throwers couldn’t make it to the final.

Arshad, who once wanted to be a cricketer, had said prior to Olympics, had said that he would be eyeing a 90m throw in Olympics.