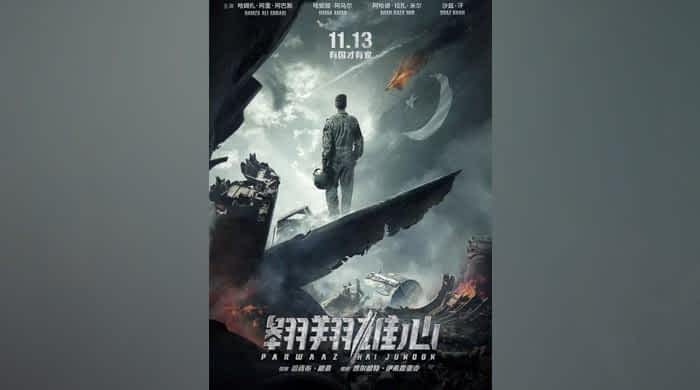 The cover of the Pakistani film Parwaz Hai Junoon. — Twitter/shen_shiwei

Pakistani film Parwaaz Hai Junoon has premiered in China’s Beijing city and will be screened across the country on November 13.

The aerial combat-war film, with a touch of romance, honours the Pakistan Air Force (PAF) and the pilots who put their lives at risk to protect the country’s citizens.

Earlier, speaking to Geo.tv, Shen said that the flick would be distributed by China Film Co. Ltd. and that the Chinese-language trailer mentions that Parwaaz Hai Junoon is made by Beijing’s “Pakistani iron brother Air Force”.

With regard to the business the film is expected to churn out, he said a better understanding will come once it debuts in China.

Moreover, Abbasi, the lead actor, also spoke on the development, saying he is “grateful to Allah that I got to be a part of the 1st Pakistani Film to be released in China after 40 yrs”.

The movie — featuring Ahad Raza Mir and Hania Amir as well — became the first one from Pakistan to be screened in mainland China.