PDM to finalise an agreement on Nov 14: Fazlur Rehman 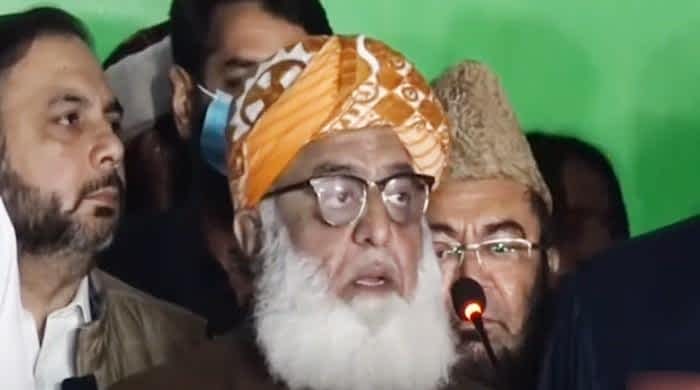 Maulana Fazlur Rehman speaks to media after the PDM’s meeting in Islamabad, on November 08, 2020. — Geo News

Maulana Fazlur Rehman, the chief of the Opposition’s Pakistan Democratic Movement, on Sunday said  that the leaders of the  alliance  would hold a meeting on November 14 to finalise an “agreement” and decide the road map ahead.

Speaking to media after a PDM meeting in Islamabad, he said PDM has decided to draft an agreement, adding that the steering committee would meet on November 13, where all the parties would bring forward their recommendations.

“Through the parties’ recommendations, a mutual agreement will be made,” he said.

On November 14, in Islamabad, the party leaders will convene and deliberate on the recommendations of the steering committee and give the agreement a final shape.

Fazlur Rehman said that in the meeting today, the country’s political situation was deliberated upon and the “most urgent issue” of the economic crisis in Pakistan was also discussed.

The PDM chief said that in the backdrop of the various issues that plague Pakistan, PDM’s future road map was debated in the meeting.

“A person is no longer able to lead a dignified life (in Pakistan),” said the PDM chief.

“PDM has decided to take our movement forward and a schedule for more rallies in the various cities of Pakistan was discussed,” he said.

Fazlur Rehman said in PDM’s view, the movement’s real purpose is to restore democracy and the rule of Constitution in Pakistan.

Talking about today’s meeting, he said that the “disrespect” shown to the Sindh police’s high command and the incident that had transpired in Karachi with regard to Maryam Nawaz and retired Capt Safdar Awan was once again condemned.

Fazlur Rehman said it had been three weeks since the Karachi incident, but a report has not yet been brought forward.

He said that despite members of the Opposition facing cases launched by the National Accountability Bureau and other institutions, a decision in the case of “PTI’s foreign funding” was still pending.

The PDM chief went on to say that while cases are being filed against the Opposition leaders, there is “silence” when it comes to PTI-leader Jahangir Tareen’s “corruption”.

He said that the meeting also expressed concerns over the arrest of Editor-in-Chief Jang and Geo Group Mir Shakil-ur-Rahman who has been incarcerated for over 200 days despite the expiry of the remand granted to the National Accountability Bureau.

Tens of thousands of Muslims protest over Macron's Islamophobic remarks