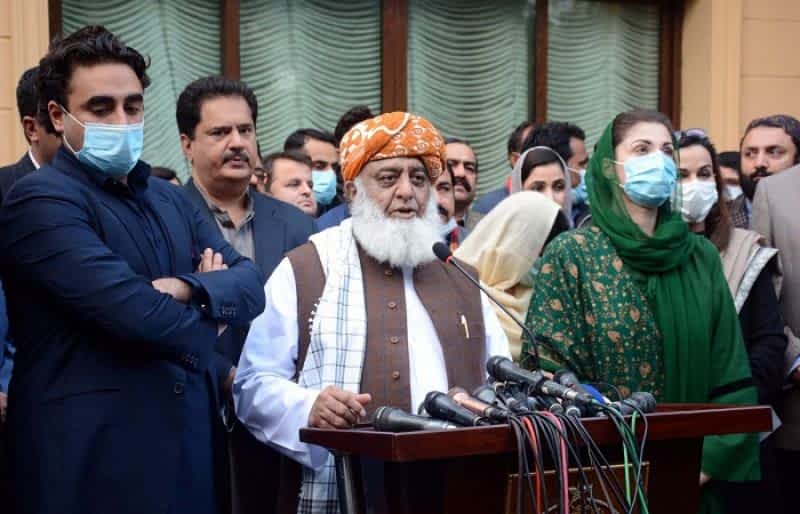 The Pakistan Democratic Movement on Wednesday vowed it will hold its next rally in Lahore — which they have termed as the “final nail in the government’s coffin — despite the administration “turning the venue into a dam”.

PDM chief Maulana Fazlur Rehman, flanked by PPP chairman Bilawal Bhutto Zardari and PML-N vice president Maryam Nawaz, addressed a press conference following a meeting between the three to inform the media that the rally, due to be held at Minar-e-Pakistan on December 13, will be held “at all costs”.

“And in the coming days we will finalise the strategy for throwing our resignations in their faces,” Fazlur Rehman added, referring to his call a day earlier for all Opposition parliamentarians to hand in their resignations from provincial and national assemblies to party heads by the year’s end.

The PDM has accused the government of deliberately attempting to prevent the 11-party Opposition alliance from holding a rally at the venue by flooding the ground with water.

A day earlier, Maryam had shared a video showing water steadily flowing from a pipe with the Minar-e-Pakistan monument in the back drop. She said this “reflects PM Imran Khan’s fear and the certainty that the government will soon come to an end”.

“He knows he is about to go. InshaAllah the rally will take place and the government will also go. Stay tuned.”

Prime Minister Imran Khan has, on multiple occasions, said that the government will not stop the Opposition from holding rallies, even as the Punjab government refused to grant permission owing to a rise in coronavirus cases.

The prime minister, did however warn that any organisers or facilitators, from kursi walas to sound system handlers, will be arrested for offering services in violation of coronavirus safety protocols under which public gatherings are banned.

Fazlur Rehman, in his address today, said that the government’s moves in the lead up to the rally were discussed in today’s meeting.

“We already made decisions yesterday and we announced them yesterday to the media. Today, during our discussions, we came to debate over how the Punjab government is making a dam out of the Minar-e-Pakistan venue so that it is rendered useless to hold a rally.

“They don’t want to stop us, but don’t want to give us permission and then where we want to hold a rally, they’ve created a dam. So we discussed alternate strategies as well. But the rally will take place at all costs,” Fazlur Rehman said.

He underscored that if the government creates hurdles then the Opposition will “forge a second path” and then a third if required. “But we will not divulge anything to you at this point,” he said, to amused chuckles from reporters.

The PDM chief said that a steering committee is yet to meet and decide on a schedule of activities.

When asked how the Opposition movement will see that democracy is upheld while ousting the incumbent government, Fazlur Rehman said: “There is no democracy in place today. It is dictatorship that has buried democracy. We have spoken of a democratically elected government of the people and the supremacy of the Constitution. We do not accept this government as one elected by the people, or one that is Constitutional or democratic.”

Fazlur Rehman, speaking of what will happen to the Senate electoral college and elections when the Sindh Assembly will be dissolved due to resignations, said that if the next Senate elections are held with the current assemblies, they will be “fake elections”.

“We consider breaking the electoral college a democratic process and are making a strategy for that. We are also consulting constitutional experts.”

Fazlur Reman also added at one point: “What disparity is this that they are allowed to hold rallies, and we are not.”

Bilawal, when asked why PPP has taken to the streets when it used to believe in parliamentary politics, said: “Our politics began from the streets. We have fought against every dictatorship and will continue to.”

Bilawal, to another question, said that all the 11 parties are resolute to “send the government packing”. “We are all on the same page […] we had declared in September that resignations will be part of the options we will consider.”

“We will use every tool we can to send them home. And the people are all with us.”

Maryam, during her interaction with media, said: “Yesterday, Maulana sahab represented all of us and it is our joint decision to hand in resignations.”

She said that the venue for the rally will not change and the gathering will be held with full enthusiasm.

The PML-N vice president, to a question regarding past government projects to which the current government are “laying claim by placing their inaugural plaques”, said: “They have no projects for us to lay claim to. Which projects of theirs will we ever be able to take over?”