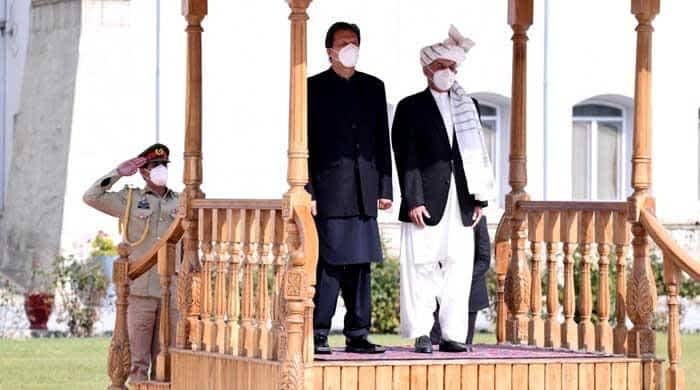 Prime Minister Imran Khan (L) and Afghan President Ashraf Ghani stand in respect for the national anthems of both countries during the official reception held at the Presidential Palace in Kabul, on November 19, 2020. — PID

In his first tweet on the matter following his return from his maiden visit to Kabul, the premier said that Pakistan has the most at stake after Afghanistan from peace in the region as it will “allow for connectivity and trade, bringing prosperity to both Afghans and Pakistanis”.

“Our people in the tribal areas, who have suffered the ravages of the war in Afghanistan, will especially benefit from peace and trade,” he said.

The prime minister said that his visit “was another step towards conveying Pakistan’s commitment to peace in Afghanistan”.

“I have never believed in military solutions which is why I always believed that in Afghanistan peace will be achieved through political dialogue,” he added.

During his visit to Afghanistan, PM Imran Khan said that Pakistan will do its utmost to end violence and establish peace in Afghanistan.

Holding a press conference alongside Afghan President Ashraf Ghani, he said: “The people and government of Pakistan have only one concern, and that is to establish peace in Afghanistan because the people of the country have suffered for four decades.”

The two sides, after discussions, also released a “shared vision”, aimed at advancing a forward-looking cooperative partnership between the two countries for political, economic, and people-to-people exchanges.

Confirming commitments made on previous occasions, they agreed to take rapid action on three main strands of activity, including identifying lead officials to take forward each activity, quoted verbatim below:

a. By 15 December 2020: Re-energizing joint intelligence services-led work on analysing, mapping and cooperating against enemies of peace and those undermining the peace process.

b. By 1st January 2021: A joint proposal for refugees return, elevating and intensifying treatment of this issue, to the point where credible and progressive action can start to be taken.

c. By 1st January 2021: A joint proposal to further regional connectivity, in a way which strengthens both Afghanistan and Pakistan, but also the wider region.