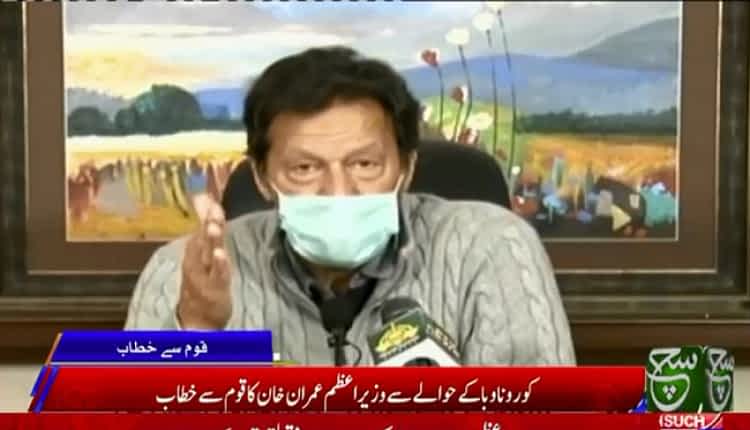 Prime Minister Imran Khan has appealed to the people to avoid gatherings of any sort as the country grapples with an intensifying third wave of the coronavirus pandemic.

“I exercised precaution for a whole year. I never went to any wedding or even to a restaurant to eat. I practiced social distancing and kept my mask on for the most part,” the premier said, as he began his video message.

“So I was safe. I was among those who remained safe in the first two waves, he said.

The premier said that in the Senate election, however, he “did not exercise as much caution and so caught the virus”.

He said that today he cannot stress enough the need to exercise safety precautions.

“The third [wave] is much more intense than the first two. I advise you all to be extremely careful.

“The first thing you should do is wear a mask. It has been proven across the world that wearing a mask dramatically reduces the chances of you contracting coronavirus,” explained PM Imran Khan.

He said secondly, it is important to understand that Pakistan “does not have the resources to go [under a complete lockdown] and feed people and take care of them”.

“Even countries far better off than Pakistan do not have the resources to do such a thing,” the prime minister added.

He acknowledged that ideally the country should shut down, but what we can do given the circumstances, is follow safety measures, like wearing a mask.

“Try your utmost [to do this religiously] and tell others too. Because I fear the third peak that is coming, will be worse than the first two peaks,” he reiterated.

The premier said that “there is no telling where it is headed”.

“Our hospitals are already full and continue to fill up. Especially, with the variant from UK that people have brought to Lahore, Islamabad and Peshawar, where we are witnessing a rapid rise in cases,” he said, urging people to realise the gravity of the situation.

PM Imran Khan said more and more people are being put on ventilators and oxygen beds and called upon the nation to exercise the same level of caution that they did in the first wave.

“People cited our example throughout the world, saying we tackled the situation far better than most countries at that time,” he remarked.

“I know it has been a year since and people no longer bother, but I will say this to you again: God forbid, if this continues to spread at the rate it is, all our hospitals will fill up entirely,” the prime minister went on to say.

He said there is a worldwide shortage of vaccines and those promised to Pakistan have been delayed because there are shortages in the countries that manufacture them.

“So it is of paramount importance we follow [standard operating procedures]. Do not go to gatherings, such as weddings, restaurants, as these are places considered to be super spreaders,” the premier said.

PM Imran Khan said that the people must understand that factories and businesses cannot be closed down and so they must, at an individual level, avoid all such activities that can lead to the spread of the virus.

“God has been merciful to me and my wife, but let me tell you, this is a disease that if it gets into your lungs, it is highly dangerous. So I plead to you, please, be careful,” he concluded by saying.