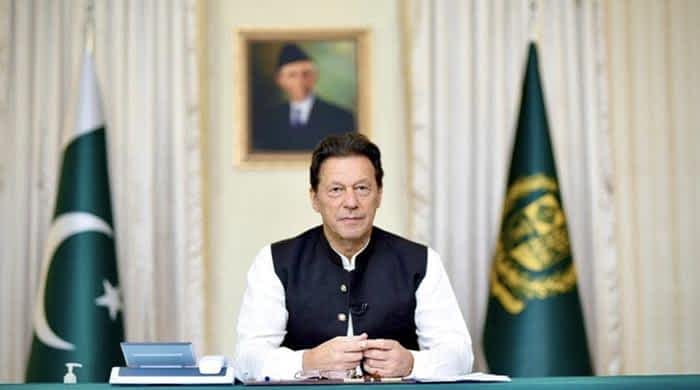 Prime Minister Imran Khan answering questions during live telephone calls from the people of Pakistan in Islamabad, on August 1, 2021. — Twitter/@PTIofficial

In the backdrop of Sindh government’s decision to impose a province-wide lockdown, Prime Minister Imran Khan on Sunday said opting for such a measure means people will go hungry.

“We do not want to damage our economy by imposing a lockdown […] We took the right decision by imposing smart lockdowns,” he said while responding to live calls from citizens across the country.

He also spoke about how imposing a complete lockdown in the country is not the solution and cited the example of India, where the situation worsened for poor people when such a measure was taken.

The Indian government only thought of the upper and elite classes, he said, adding: “Therefore, a smart lockdown is the most viable solution […] We cannot destroy our economy by imposing a complete lockdown.”

The prime minister noted that the only way to curb the spread of coronavirus was for people to get vaccinated, as he highlighted that the government had successfully administered 30 million jabs so far.

Smart lockdowns can be imposed in areas identified as hotspots, he said, adding that schools should not reopen unless all the teachers get vaccinated.

“The schools which have not vaccinated their teachers should be shut down.”

Answering a question regarding job quotas, the premier said that the Centre’s jurisdiction was smaller as compared to provinces, therefore, he would instruct all the provinces to allot job quotas to deserving people.

He said that leaders who are scared of free media are the ones who are either corrupt or have something to hide.

“If I had apartments in London [or had been involved in corrupt activities], I would have been scared of a free media too,” he said.

“I only oppose the media when fake news is disseminated, otherwise free media is a blessing for any country.”

The premiere also shed light on the future of the government’s flagship Ehsaas Programme.

Shedding light on loadshedding, he acknowledged it had caused trouble to the people, adding that the country’s power supply was affected due to water shortages as the dams received 35% less water this year.

Noor Mukadam’s killer to not be ‘spared’

The premier also spoke of the Noor Mukadam murder case, saying that he has been closely following the investigation since the beginning, adding that the incident was a very tragic one.

“I must reiterate that no matter how powerful the assailant’s family is or whether he is a US national, he is not going to be spared if found guilty,” he said.

He also spoke about the matter of the Afghan ambassador’s daughter’s alleged kidnapping and said that he took personal interest in the case as if she was his own daughter.

“I commend the police for the job they did in the case,” the premier said.

The prime minister, stressing the importance of electronic voting machines (EVMs), said former US president Donald Trump could not prove rigging in the presidential elections as America uses EVMs.

The prime minister said he had been inviting the Opposition for electoral reforms for a year, but they paid no heed and showed no interest in this regard.

Speaking about the July 25 Azad Jammu and Kashmir elections, he said the “umpires” and the sitting government belonged to the PML-N; the police and the election staff were also chosen by them.

“Given all this, how [can it be said] the elections were rigged?”

The premier said Sialkot was the party’s stronghold, but they lost the by-election there as well, adding that the only way to eliminate rigging was EVMS.

The premier, responding to a question, said taxes on cars had been reduced in the FY2021-22 budget, and that he would look into why the rates hadn’t decreased so far.

“We had reduced tax on 1,000cc cars so they can be bought at a lower price as common citizens use them, but if the rates haven’t been reduced, I will check them,” the prime minister said.

The premier forwarded a question related to “own money” — a premium paid to dealers to get the car sooner — to Federal Minister for Energy Hammad Azhar, to which he said: “Mr Prime Minister, we have notified the reduced prices to the dealers, but the person has asked about own money, which is a black market menace, as the demand is greater than the supply.”

Azhar said car manufacturers were speeding up production to meet the growing demand, with Toyota and Honda motorcycles reaching high levels. New entrants such as KIA, Hyundai, MG, and Photon, will also help to catch up with the demand, he said.

“I believe the gap between supply and demand will end as supply will catch up. It is a good thing that the demand for cars is increasing as it shows that there is economic prosperity,” he said, adding that the authorities would crack down on the black market.

The prime minister noted a society where corruption was rife could never prosper, and the nations which had controlled the menace had prospered.

A country’s economy is devastated not when there is corruption at the lower levels, but when the nation’s prime minister and ministers are involved in the menace, he said.

The prime minister noted the divide between the rich and poor in developing countries was widening with time, as corrupt rulers were stashing away their “stolen” wealth in developed countries.

The prime minister said the money of the country’s poor people was being sent abroad and invested in properties like Mayfair in London — where former prime minister Nawaz Sharif resides.

The war against corruption is being fought in the interest of Pakistan and the rule of law, he said, adding that corrupt leaders were seeking concessions under the National Reconciliation Ordinance (NRO) from him, just like they did from former president Pervez Musharraf.

Slamming the past governments, he said they had destroyed the country’s institutions, as no institution can progress in their respective field or do its job.

“Pakistan International Airline was an exemplary institution […] and there was a time when Pakistani television [dramas] were viewed in India,” he said, lamenting over their current state.

“The Saudi foreign minister assured me he would resolve them,” he said.

The premier said on the request of the Pakistani community living in Uzbekistan, the federal government is working on establishing a Pakistani bank over there.

As many as nine million Pakistanis live abroad, and we will give them the right to vote, he said, speaking about the government’s electoral reforms.

I wish to transform Pakistan into a country that would not beg for donations anymore, he said, adding that he also aspired for the green passport to get respect abroad.

“When nations start respecting themselves, then others respect them.”

Norway now has fewer deaths from COVID-19 than ordinary flu