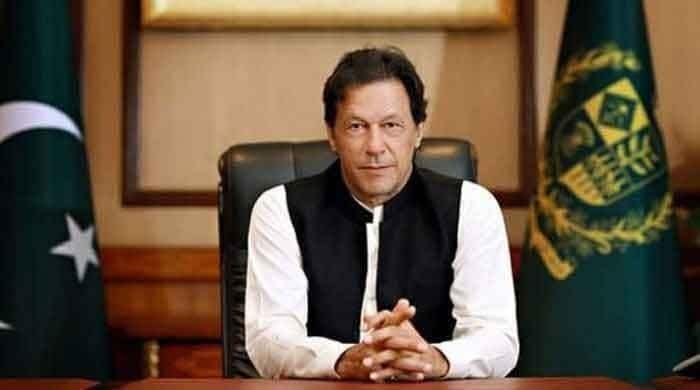 PM Imran Khan, in an interview with German magazine, said India is a threat to its neighbours.

ISLAMABAD:  Prime Minister Imran Khan urged the US to adopt an “evenhanded” treatment  as the Pakistani leader warned that the region could “flare up at any time” due to India’s   actions in Indian occupied Kashmir.

In an interview with German magazine Spiegel, PM Imran reflected US was under the impression that India could limit China’s influence in the region but it “is a completely flawed promise”.

“India is a threat to its neighbours; to China, Bangladesh, Sri Lanka and to us,” said the premier. “It has the most extremist racist government in the subcontinent. It is a fascist state inspired by the Nazis in the 1920s and ‘30s.”

PM Imran said Islamabad expected evenhanded treatment from the US with respect to India “especially with the dispute in Kashmir”.

“The region is a hotspot, it could flare up at any time. That’s why we expect the US, as the strongest country in the world, to be even handed, whoever becomes the president.”

Explaining the ruling Bharatya Janata Party’s (BJP) anti-Islam manifesto, the premier said: “Read the writings of the Rashtriya Swayamsevak Sangh (RSS), the intellectual forerunner of PM Narendra Modi’s party. They openly admired Hitler. The Nazis wanted to get rid of the Jews. The RSS wanted to rid India of the Muslims.”

The “unorthodox” ways of Imran and Trump

Responding to a question about the US Elections, PM Imran noted that Joe Biden was in front in the opinion polls but “Donald Trump is very unpredictable because he’s not like normal politicians.”

“He plays by his own rules,” said the premier with a hint of admiration that did not go unnoticed by his interviewer.

The prime minister reminisced that “as a politician who started his own party and then built it up into the biggest party in Pakistan over 22 years, I also had to do a lot of out-of-the-box-thinking”.

“We were the first to rely on social media and the first to attract the youth to our rallies,” he explained. “We had to be very unorthodox, and in some ways, Donald Trump does too.”

The leverage to restore peace

Explaining Pakistan’s role in the Afghan Peace Deal, PM Imran dismissed the perception of Islamabad’s close ties with Taliban. “With 2.7 million Afghan refugees in Pakistan, we have a certain amount of leverage, which we used to the utmost,” he explained. “I am very pleased that we succeeded.”

The premier observed that Pakistan had nothing to do with the 9/11 terror attacks and reiterated that the country should not have gotten involved in the war in Afghanistan.

“I opposed it from day one. The US put pressure on us, and the military dictator Pervez Musharraf succumbed to that pressure.”

PM Imran reminded the interviewer that Osama bin Laden was a hero in the 1980s. “He supported the Mujahedeen against the Soviets in Afghanistan, and he was backed by both the CIA and Pakistan.”

“It was Pakistan’s right to recognize the Taliban, but Pakistan had no control over the Taliban. When Pakistan asked the Taliban to hand over Osama Bin Laden to the Americans, they refused.”

“No one can predict which way things will go in Afghanistan right now,” he said.

“What I can say is that after Afghanistan, the country that wants peace most is Pakistan. We have lost 70,000 people in this conflict, and our tribal areas adjacent to the Afghan border have been devastated in the last 15 years.”

“Half of the people in these areas have become internally displaced, about 1.5 million of them – victims of the conflict between the Pakistan Taliban and the army.”

PM Imran said his government, from day one, has been fostering dialogue. He said he spoke to Afghanistan’s High Council for National Reconciliation lead Dr Abdullah Abdullah prior to meeting with Gulbuddin Hekmatyar.

“We have no favorites in Afghanistan. Our only interest is that the future government in Kabul does not allow India to operate from there against Pakistan,” he asserted, stressing that Hekmatyar not only accepts the constitution in Afghanistan but also participated in the elections.

Regretting the “double game” image given to Islamabad, PM Imran said it started in the 1980s, after the Iranian revolution.

“Many in the West began looking at Muslim countries as if there was a divide between liberals and fundamentalists – a very artificial assessment,” he reflected. “Muslim countries are no different from other communities. All communities are divided into moderates, which make up the majority, and the extremists.”

Stressing his push for peace, PM Imran said he offered mediation in Yemen conflict as soon as he came into power. “Such a colossal human rights disaster is going on there.”

The premier shared speaking with Iran and Saudi Arabi’s Mohammad bin Salman. “But you can´t force anybody to agree on peace talks if they don’t want to.”

PM Imran noted that a Saudi-Iran war “would be a disaster” and “devastating for countries all over the world, especially the poor, and the price of oil would shoot up”.

Discussing Middle East’s growing ties with Israel, PM Imran reiterated Pakistan’s position. “Every country has its own foreign policy priorities. They have to think about their own people, and it’s their decision.”

“As for Pakistan, the founder of the nation, Muhammed Ali Jinnah, a brilliant man, spoke in the 1940s about the Palestinian situation as a huge violation of human rights. Pakistan still takes this view,” he asserted. “Unless there’s a just settlement, we cannot recognize Israel.”

The premier has never shied from sharing his admiration of the Chinese governance model. He told Spiegel it was remarkable that China lifted 700 million people out of poverty within a short period of 40 years.

“This is the model I want to emulate in Pakistan,” he explained. “Despite not having electoral politics, they are good at bringing the best people to the top in their country. It’s a system based on meritocracy.”

PM Imran admired “how the Communist Party sort of sifts through all the talent and bring it to the top.”

“Furthermore, in the past seven years, China has put 450 ministerial level officials in jail on corruption charges,” he continued. “Countries aren’t poor because of a lack of resources. It’s because of corruption among the leadership.”

“As we know from the Panama Papers, the same is true for Pakistani politicians. Millions of dollars went into properties in the most expensive areas in London, siphoned off from this country.”

The premier said he was undeterred by the opposition uniting against him, terming the movement a blackmail to get of corruption cases. “But there’s no way I will ever relent,” he stressed. “Look, we are facing the biggest trade gap in our history.”

PM Imran noted that Pakistan’s “imports were $60 billion, but exports were only $20 billion”.

“The rupee is falling and there’s inflation because we import fuel. Everything is getting more and more expensive, even electricity,” he admitted.

“We have to raise our revenues, so we have to increase our tax base,” he explained. “We’re going through these painful reforms and all these guys from the opposition get together.”

“They are worried that once we stabilize things, they will all end up in jail because of huge corruption cases.”

As the country with one of the lowest COVID-19 tally, PM Imran explained his government decided to impose smart lockdowns keeping in view that almost half of the population lived on daily and weekly wages.

“We only restricted areas if we found that there was an outbreak, and we did not stop our supply lines. We did not stop the agriculture sector and quickly reopened the construction sector, because that’s what employs the most people in the urban areas.”

“That saved us,” he reflected. “India instead restricted people to their homes in poor areas – a complete lockdown. They have a lot of poverty now, same in Iran.”

Imran said around 180,000 to 200,000 people are getting tested every week as the national coordination team looks at multiple statistics with a clear composite picture of the epidemic.

“From peak numbers in June, we saw a steady decline in cases, positivity and deaths across the country until late August. Now, we’re hoping to survive the second wave.”

So who helps him make these decisions?

“Only a fool doesn’t talk about everything with his wife,” said the premier. “She has great wisdom.”

“I discuss everything with her, also problems I face in government, dealing with complex situations,” he continued. “She is my soulmate. She is my companion. I would not have survived without her.”

Reese Witherspoon admits she was ‘terrified’ of her pregnancy

PTI to emerge as leading party in Senate, says CM