PM to address big public gatherings from next month in Sindh: Haleem Adil 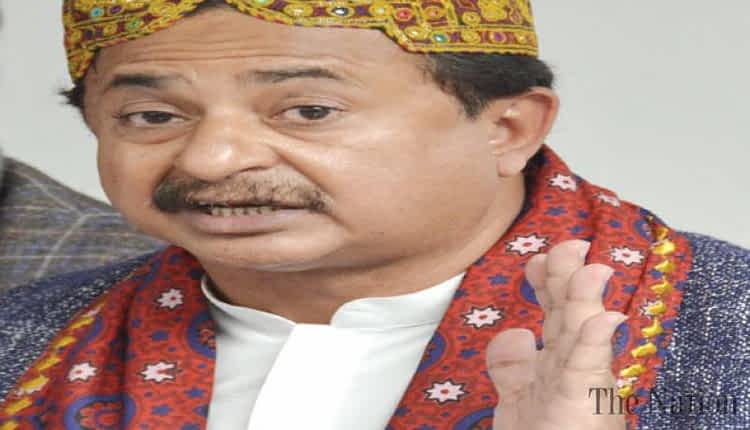 KARACHI – Haleem Ali Adil Sheikh, the Leader of Opposition in Sindh Assembly, has said that Prime Minister Imran Khan would address big public gatherings in almost all districts of Sindh from the next month adding he claimed that there would be no Governor Rule but rather there would be the Prime Minister Rule in Sindh to cleanse the dirt created by corrupt PPP rulers. Sheikh, who is also central vice president of PTI, spoke to the media persons after appearing in a court with regard to a case registered against during the by-polls in Ghotki district and then addressed the press conference at the residence of Syed Zahir Hussain Shah in Sukkur on Thursday.

Sheikh said that the PTI government, which had already launched mega projects in Karachi and other districts, would launch more projects in other districts. He said that such projects would be announced by the Prime Minister himself during his public gatherings and meetings with the aspiring people, who were likely to join PTI.

Khan will meet each and every notable person himself and will share the future policies and plans regarding Sindh and its people. He said that it was a wrong perception that the Federal Government was mulling over to impose the Governor rule in Sindh adding he made it clear that there would be ‘Prime Minister Rule’ in Sindh to cleanse the dirt and mess created by corrupt PPP rulers for the past 13 years. He said that the Federal Government under Prime Minister Imran Khan on the request of the PTI leadership from Sindh would now try its best to purge the province from bandits, drug dealers, criminals and corrupt people by seeking assistance from state institutions to launch the effective operation against such elements to eliminate them as soon as possible.

“The personnel of Rangers, Federal Investigation Agency (FIA), Anti-Narcotics Force, Pakistan Customs and other federal institutions will be asked to move into the actions on the directions of Prime Minister Imran Khan to get rid of the criminals , killers and drug pushers in every part of the province very soon” he added and informed that writ of the government would be established and the people would not be left at the mercy of the corrupt rulers, who had deprived them of the basic amenities of life.

The PTI leader said that before the public gatherings of Prime Minister Imran Khan, Foreign Minister Shah Mehmood Quraishi, would organise the big public gathering in Mithi town to show the solidarity with the leaders of Bheel Intellectual Forum, PTI workers and the people of Bheel community, who were subjected to brutal police torture on the behest of PPP leaders, when they had staged the demonstration against the killing of Dodo Bheel by the security guards of the mining firm. He said Mr Qurashi, Dr Arbab Ghulam Rahim and other PTI leaders would participate in the public gathering in Thar on August 8 to start the drive against the corrupt rulers of Sindh.

Mr Sheikh said that the Prime Minister during his first public gathering would announce the future plans and policies to strengthen the party in Sindh and to get rid of the corrupt PPP rulers.

He said that he would personalty request Mr Khan to first launch the massive operation against those unscrupulous elements, who were sitting with him in Sindh Assembly and other parliaments through the state institutions, who according to him, were more dangerous than those operating in the riverine areas of Sindh,” The bandits, who are residing in the posh areas of the cities and enjoying the government perks have caused more damage and devastation in the province than those, who are robbing the people on the roads,” he remarked. Mr Sheikh claimed that Pakistan People’s Party( PPP) as a political party was breathing its last due to inefficient and corrupt leaders of the party.

He said that first the people of Karachi got rid of Altaf Hussain and his party MQM, then people of Lahore/Raiwind from Nawaz Sharif and his cronies and now it was the turn of people of Sindh to get rid of the corrupt and criminal PPP rulers and leaders. “There will be no PPP in Sindh after the next general elections,” he added and claimed that people with the stainless characters from Sindh were likely to join PTI very soon.

“The outlaws are roaming freely, robbing and kidnapping the people for ransom in every nook and corner of the province and people from every segment of the society feeling unsafe and insecure due to the worst governance by Syed Murad Ali Shah,” he added. The PTI leader said that it was the height of lawlessness that the hardened criminals were issuing the threats to police officials by sharing the videos on social media only because they were being patronised and harboured by the rulers themselves.”

The police officials, who pick up the courage against such outlaws and criminals are transferred by the PPP rulers within days after their good actions,” he added. Mr Sheikh said that criminals were roaming freely while the political opponents of PPP were being subjected to the worst political victimization for raising their voice against the rampant corruption, lawlessness and other chronic issues of the province.

Mr Sheikh again lashed out at Chief Minister Sindh Syed Murad Ali Shah for running the cell in Chief Minister House to sell narcotics in every part of the province. He claimed that Mr Shah sensing his possible unceremonious ouster from office was trying to seek the citizenship of Canada again. He said that Murad Shah, who was once a salesman of a shop, was now willing to buy the outlets after looting enough money. He reiterated his claim that Murad Ali Shah who along with his close aide MNA Sikandar Ali Rahupoto earned enough by selling drugs, would not be in Pakistan to contest the next general elections.

The PTI leader alleged that PPP leaders, who had implicated him in the false cases during the by-polls in different constituencies of Sindh, spent the looted the pubic money during the elections in Azad Jammu and Kashmir. He said that Bilawal Bhutto Zardari, Syed Nasir Hussain Shah, Saeed Ghani and other leaders had not only disbursed Rs100 million among the ticket holders of the party to buy votes during the recent polls of AJK but also misused the government aircraft.” The plane was misused for transferring the looted public from Sindh to buy votes in Kashmir, he added and alleged that the money they had spent there was meant for the welfare schemes and for purchasing the vaccines and medicines for the people of Sindh,

He said that PPP leaders were seen in the luxurious official vehicles during the polls in the valley but could not win the contest. He alleged that one of the PPP candidates, Chudhary Mohammad Yasin, who won two seats, killed two activists of PTI would not only be disqualified but would also be sent to gallows. Mr Adil Sheikh said that he respected the courts and hoped that he and other workers, who were booked in the cases in the flimsy charges in Ghotki, Karachi, Umerkot districts, would be acquitted. He said that he was being furnished with the legal notices after he had exposed the criminals and drug dealers, who according to him were sitting in the parliaments and enjoying the powers and perks. Mr Sheikh also held an important meeting with GDA leader Sardar Ali Gohar Mehar and discussed with him the political situations of the province.

Mr Haleem Adil Sheikh also addressed the press conference at the residence of Syed Zahir Hussain Shah in Sukkur on Thursday. Mr Sheikh addressing the press conference in Sukkur along with PTI leaders and the victim of the sexual harassment, Ms Aliza. Ms Aliza speaking the news conference deplored that she had to quit her studies after she was sexually harassed and tortured by the teachers when she was the student of the matriculation class swayback in 2019. She alleged that teachers including Nadeem Mirani, Ghulam Shabir Bhagat, Ghulam Rasool Bhatti and their supporter Khan Mohammad, who was the headmaster of the school.

Ms Aliza alleged that she was time and again harassed by same teachers and was forced to commit suicide after failing to get any justice from anywhere. She said that he had undergone very traumatic conditions. “I am still under the treatment for various complications due to my suicide attempt but I am still to get the justice,” she added. Mr Sheikh consoled her said that there were enough laws to punish such goons and rapists but functionaries of Sindh government were interested to implement such laws and send such criminals behind the bars. He assured the victim that he would soon take up the issue with the high-ups of Federal government for the inquiry into tragic incident.