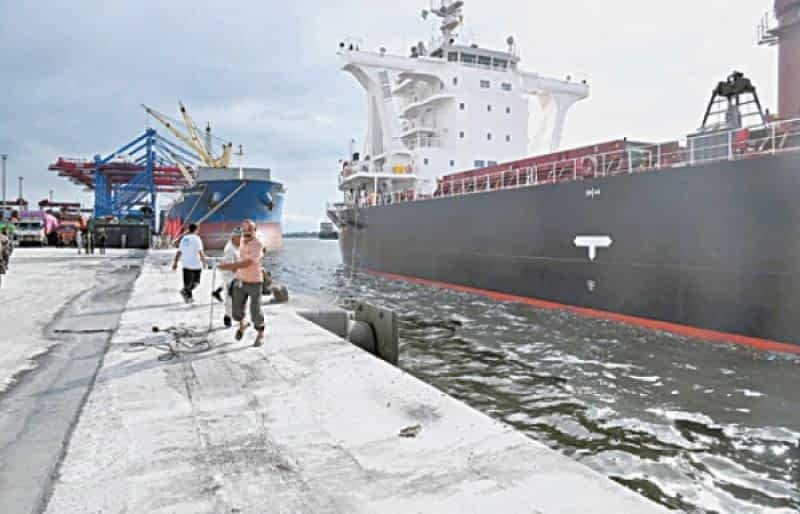 Congestion issues continue to plague Karachi’s main port with the continuing arrival of vessels carrying wheat and sugar that have been given priority berthing.

Executives from fertiliser and oil seeds sectors say their imports are stuck and cement manufacturers say their exports of clinker have been held up while port capacity is consumed with the offloading and clearing of wheat and sugar cargoes.

KPT spokesperson on Monday said that six vessels carrying wheat were currently berthed at East Wharf with none waiting in outer anchorage. “But the problem could reappear in the near future,” he added.

Commerce Adviser Abdul Razak Dawood said “we are very much aware of this problem. I am particularly concerned because our exports get affected as port capacity is there but we need more efficient handling at the port.”

However he described the problem as “temporary”, saying much of the wheat import have already gone through and whatever remains “will be spaced out further in the future”.

In a cabinet decision made on Aug 4, 2020, the Trading Corporation of Pakistan (TCP) was directed to arrange for the import of 1.5 million tonnes of wheat and 0.3m tonnes of sugar. Shipments of wheat and sugar booked by the TCP began arriving at the port on October 17, and private sector shipments began on 25 August.

Thus far 1.281m tonnes of wheat have been discharged out of 1.461m tonnes manifested quantity according to KPT on Dec 7. A number of vessels are still to arrive.

Fertiliser Manufacturers of Pakistan Advisory Council (FMPAC) Executive Director Brig (retd) Sher Shah Malik said from Lahore that the fertiliser industry had been facing berthing issues for DAP at the Karachi Port since last month, which may lead to DAP shortage.

He said FMPAC had informed Federal Minister for National Food Security and Research Syed Fakhr Imam that the application of DAP on sugarcane and maize crops is also to be carried out in the next two to three months. “Delayed application of DAP on these important crops would severely hamper their sowing which would negatively affect yield, marginalising food security,” he said in a letter to the minister two weeks ago.

He said priority berthing of wheat and sugar is delaying the discharge and transportation of DAP fertiliser which could impact the wheat harvest next year.

He is not alone. Former Vice President Pakistan Vanaspati Manufacturers Association (PVMA) Sheikh Umer Rehan said three to four ships carrying soybean and canola seeds have arrived at the outer anchorage, but the port authorities informed us that these vessels will get berthing after 20-25 days.

“This situation could result in increasing demurrage charges, thereby impacting the price of ghee and cooking oil in the market,” he cautioned.

Sources in the commerce ministry said the bottlenecks begin once the wheat gets offloaded because the speed at which wheat is loaded into trucks and taken away is very slow. They said the priority berthing given to wheat and sugar vessels is unlikely to be taken away since it is due to these imports that prices of these essential items are coming down in the market.

They said the ports are now running at 70 per cent capacity as compared to 35-40pc capacity due in large part to the arrival of massive quantities of wheat and sugar, thus creating a bottleneck.

bedazzling the world of fashion