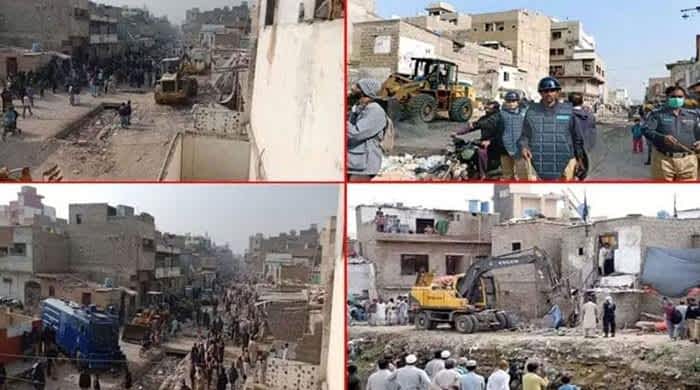 The Karachi Metropolitan Corporation (KMC) held a massive anti-encroachment operation on Sunday morning in District East’s Gulistan-e-Zafar Society to clean the Manzoor Colony Nullah. Residents of the area protested against the operation and caused hurdles in it.

Heavy machinery was used to demolish huge residential and commercial units in the presence of a heavy contingent of officials of the law enforcement agencies. The deputy commissioner of the East district had already written a letter to the Sindh director general, the director anti-encroachment force of the Board of Revenue, the relevant K-Electric officials and several other municipal agencies of the city regarding the provision of security and equipment for the operation.

In compliance with the orders issued by the Supreme Court of Pakistan, an anti-encroachment operation was scheduled to be held in the Gulistan-e-Zafar neighbourhood in coordination with the KMC from 9am on Sunday until the completion of the task.

According to the District East deputy commissioner’s letter, the senior director anti-encroachment cell of the KMC would lead the operation under the overall supervision of the assistant commissioner of District East’s Ferozabad area.

A sufficient contingent of police officials had been requested for accompanying the anti-encroachment team in order to avoid any untoward incident. The KMC has planned the operation to ensure the smooth flow of water during the monsoon rains.

Among the four choking points that led to the drowning of Sharea Faisal during last year’s massive rainfall, Gulistan-e-Zafar was identified to be one of them, with the others being Zehri House, Noorani Kabab House and Mehmoodabad. The survey report said that encroachments along the Mehmoodabad Nullah had blocked the rainwater.

Talking about Sunday’s operation, the KMC’s senior director anti-encroachment, Bashir Siddiqui, said that more than 30 bungalows have additional portions constructed that are encroaching on the storm water drain.

He said that these include servant quarters, garages and kitchens. He added that, according to their measurements, they need 20 feet on both sides of the drain.

The operation took place after negotiations were held between the assistant commissioner of Ferozabad and the area residents. An agreement was reached that the residents would voluntarily demolish the portions of their houses exceeding the designated limit.

Parking spaces of as many as 18 houses in the neighbourhood were also demolished by the KMC’s anti-encroachment team. According to the municipal body, houses and commercial units situated up to 17 feet from the nullah would be demolished. This condition was also agreed upon by the residents.

Govt to come up to people’s expectations: CM