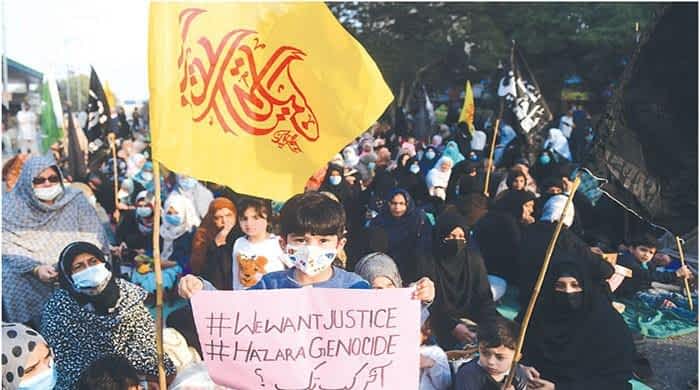 Massive traffic jams were observed in various parts of Karachi on Wednesday as the Hazara community and Shia groups expanded their protest sit-ins against the Machh tragedy on Wednesday to different areas of the metropolis.

As the bereaved families in Balochistan have not buried the bodies in protest and are demanding that the prime minister pay a visit to them, Shia groups, including the Majlis Wahdat-e-Muslimeen (MWM), Shia Ulema Council, Jafria Alliance, Imamia Students Organisation and Jafaria Students Organisation, and the Hazara community held sit-ins on various roads of Karachi to express solidarity with the families.

Hundreds of men, women and children attended the protests. They said they would continue their demonstrations until the demands of the relatives of the slain miners were met. The protesters said they did not want to cause any trouble to the general public but at the same time demanded that the federal government ensure the security of civilians.

The MWM continued with its main protest camp at Numaish Chowrangi on MA Jinnah Road on the third day. As a result of the protest, the track from Capri Cinema to Gurumandir has been closed and people are advised to use Corridor 3 and the Soldier Bazaar route instead. Other areas where protests were held included Abbas Town in Gulshan-e-Iqbal, Kamran Chowrangi in Gulistan-e-Jauhar, Power House Chowrangi in North Karachi, Colony Gate on Sharea Faisal, Malir 15 and the National Highway in Steel Town.

Talking to the protesters at Numaish Chowrangi, MWM leaders reiterated their demand for effective implementation of the National Action Plan against militants. “We demand the authorities take immediate and effective action against all the banned militant organisations which are re-emerging with new names,” said MWM leader Allama Sadiq Jaffery.

He said the federal government sent two of its cabinet members to Quetta to negotiate with the protesters who have been refusing to bury their loved ones until Prime Minister Imran Khan meets them. “It is unfortunate that the presence of thousands of women and children in the chilling cold in Quetta has not inspired the authorities,” Jaffery lamented. Instead of going himself to Quetta, the PM sent two of his cabinet members there that showed that he was using a religious card, the MWM leader said.