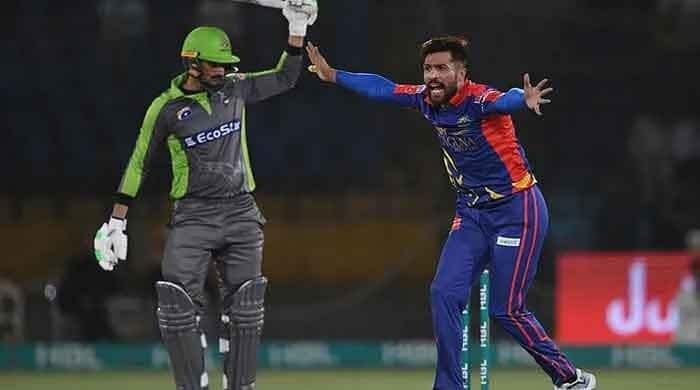 KARACHI: Since having met last year in the final, holders Karachi Kings will take on Lahore Qalandars in a crucial game of the Pakistan Super League (PSL) 2021 here at the National Stadium on Sunday (today).

The match begins at 7pm.

Kings will be more confident as they notched their second win after they downed Multan Sultans by seven wickets in Saturday’s day-game.

Kings achieved the 196-run target with seven balls to spare. Babar Azam seemed in elegant touch, scoring 90 not out, his second successive fifty and 16th of his PSL career. He is a real threat for the opposition. He has learnt how to finish the game and has rung an alarm bell for the competing teams.

Kings’ English wicket-keeper batsman Joe Clarke (54) also in Saturday’s show played another entertaining innings by hitting four huge sixes. And their opener Sharjeel has also shown his class by scoring 105, his second PSL century, against Islamabad United the other day.

Kings also have some solid bowling resources in Mohammad Amir, who on Saturday bowled a splendid over against Multan’s in-form skipper Mohammad Rizwan in which Kings also took two reviews, although unsuccessful. Rizwan was beaten three times comprehensively which was a superb demonstration of fast bowling seen for the first time in this event so far. Kings’ Arshad Iqbal has been continuously unsettling the batsmen and has added to last year’s champions bowling weight a lot.

Lahore, on the other hand, will depend on Mohammad Hafeez and Fakhar Zaman who are in good touch, especially Hafeez who has scored two fifties in three games. The T20 is a game of just one or two players which can turn the game any way. Lahore’s fast bowling resources are much better, also having Shaheen Afridi and Haris Rauf, the two lethal bowlers with international experience.

Lahore have also hired the services of Nepalese young leggie Sandeep Lamichhane in place of Rashid Khan of Afghanistan who has left to join his national side for the Test series against Zimbabwe in the UAE next week.

Both teams have won two matches each. Karachi started their title defence with an emphatic seven-wicket win over former champions Quetta Gladiators on February 20. Kings then were beaten by United with a five-wicket margin on February 24, before outwitting Multan by seven wickets on Saturday to take their points to four from three games.

Lahore had started superbly when they had beaten both Peshawar and Quetta in their first two matches by four wickets and nine wickets margins respectively. However, Sohail Akhtar-led Lahore tasted their first defeat when they were downed by Multan by seven wickets on February 26.

Airlines suspends use of some 777 jets