Ready to stand with Shehbaz on budget day despite PML-N’s inappropriate behaviour: Bilawal 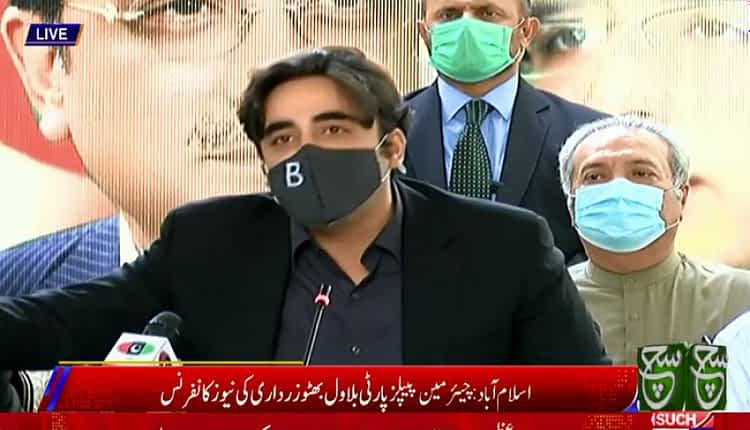 PPP Chairman Bilawal Bhutto-Zardari on Friday said that the party would support Leader of the Opposition in the National Assembly Shehbaz Sharif on the budget despite the inappropriate behaviour of some PML-N members.

Addressing a press conference in Islamabad, Bilawal said: “I unconditionally say to Shehbaz Sharif in front of the media that all PPP members will be in your support with regards to the parliament and this [upcoming] budget despite the tantrums [of some PML-N members].”

He said that PPP members would come and vote on the day of the budget and now it was up to Shehbaz as the leader of the opposition in the National Assembly to “do his work and stop the government’s budget.”

“So despite their insults, the PPP went to Shehbaz Sharif’s invitation for dinner so we can rid the people of economic difficulties […] unfortunately our host was publicly insulted after that dinner by some officeholders of the PML-N,” said Bilawal, adding that flinging statements at guests was not a part of “our tradition, values and culture”.

The PML-N president had last week hosted a dinner reception for all mainstream opposition parties which was apparently aimed at bringing the PPP back to the Pakistan Democratic Movement (PDM). Bilawal had not attended the dinner though senior PPP leaders did.

PPP leader Farhatullah Babar said that the PPP delegation had assured Shehbaz of their support for all moves of the joint opposition that would block the way of “anti-people decisions” in the upcoming budget.

PDM Secretary General Shahid Khaqan Abbasi had, the very next day, categorically stated that there was no place for the PPP within the opposition alliance until it restored the trust it had betrayed. “If you are not committed to trusting the movement, then there is no place for you within the PDM.”

During the press conference, the PPP chairman also lashed out at the PDM, saying it should have offered resignations the same day or the next when the PPP had “supposedly” refused to listen to its demands and set out for its long march.

“If they still want to do politics of resignations then they should have given them by now.

“I think that when you have seen and the whole nation knows that the numbers are there if you want to attack Prime Minister Imran Khan and (Punjab Chief Minister) Usman Buzdar then giving resignations in that case and not bringing a no-confidence motion is akin to being an enabler of the government,” said Bilawal.

The PPP chairman also criticised the government and said that the statements since the past few weeks on the the state of the economy showed that the “prime minister has no connection to the common man.”

“There is a daily increase in inflation and poverty and unemployment have reached historic levels, yet our prime minister says that Pakistan’s economy is developing and beating a drum of prosperity.”

He said the government’s ministers had come around to accept the PPP’s stance on the economy and expressed the hope that Pakistan would escape the “IMF’s (International Monetary Fund) grip” in the budget next week.

Bilawal also addressed the current system of accountability and said there was no rule of law. “This is revenge and political engineering and their ministers themselves accept it has hurt the economy,” he said, further asking why there were differences in the treatment meted out to people.

Bilawal also reiterated his demand for parliament to be taken into confidence about the situation in Afghanistan and briefed by the relevant institutions involved so the people could decide what Pakistan’s policy would be.

Bilawal similarly hit out at an ordinance for the creation of a new media body and said the PPP would continue to oppose it. He added that the recent attacks on journalists such as Asad Ali Toor or pressure being applied to media personnel such as Hamid Mir through petitions had “exposed the government’s weakness and insecurity”.