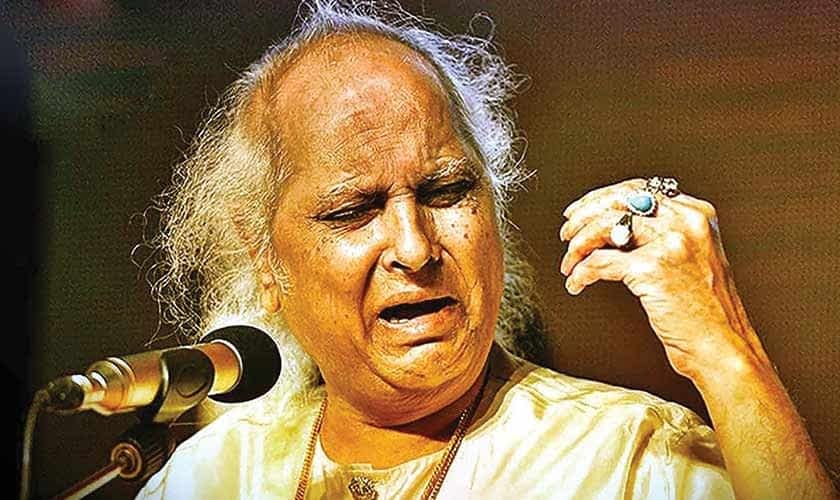 Twenty-five years ago, Pandit Jasraj performed live in Lahore. The Indian High Commission used to arrange classical music concerts in those days to mark special occasions. That year, Pundit Jasraj was in Pakistan. Taking advantage of his visit, a concert was held in Lahore in collaboration with Sanjan Nagar.

Speaking briefly at the start, he paid a rich tribute to the city of Lahore and its audiences. He disclosed that his first public concert had been in the city just before 1947.

Lahore holds special attraction for many Indians, especially artistes, because it used to be a major centre of the arts in pre-independence India. For many people and most artistes in India, that image of the city has been frozen in time after Partition. Most migrants from West Punjab carried with them the tales of the place of their birth, mystifying its significance and exaggerating its importance. Nearly all leading Indian artistes that one talks to express their desire to perform in the mythical city of Lahore.

In the nearly three and a half hour performance, the Pundit sang the ragas Mian ki Malhar and Jaijaiwanti, several bhajans. He rounded off his performance by a singing a bandish in a morning raga with bols of hamd and sanaa, meant to go down well with the audience.

From among the two raga performances, the first, Mian ki Malhar, was meant for connoisseurs. It dwelt upon the mandir asthan (lower octave) as should be done by exploring the lower tetra-chord, the touch of a master, the application of the two nikhads, and the correct intonation of the gandhar brought out the true appeal of this modal pattern which is attributed to the legendary Tansen. His Jaijaiwanti performance, was of a shorter duration. It was a lyrical rendition, more pleasing and less haunting, meant to meet the more acceptable criteria of a song.

As one listened to Jasraj, a spontaneity which has been the distinguishing features of the Khan Sahibs could be heard side by side, probably attributable to the pundit’s own multi-religious background. One of his greatest influences was Begum Akhter. When he heard her perform, he was mesmerized and decided to sing in her style. He was awestruck by her ability to evoke appeal with effortless application of the notes and he decided to follow her, but she advised him to persist with the classical forms. He did, but at the same time married it with the charm and sensuousness of the lighter forms like the thumri.

It was generally accepted that Pundit Jasraj was the leading exponent of the Mewati gharana. He received his musical education from his father, Pundit Motiramji, and elder brother and guru, Pundit Maniramji

Born in 1930 in Pili Mandori, in Haryana district, Jasraj was from a family of musicians. His elder brother, Pandit Paratap Narayan, was also an accomplished musician. He was the father of music composer duo Jatin-Lalit, singer-actress Sulakshana Pandit and actress Vijeta Pandit. His eldest brother was vocalist Pandit Maniram.

Jasraj spent his youth in Hyderabad Deccan, and performed for Maharaj Jaywant Singh Awaghela, the Takur Sahib of Sanand, who was deeply dedicated to classical music, and received training from him. In 1946, Jasraj moved to Calcutta, where he began singing classical music for radio.

As said earlier, Jasraj belonged to the Mewati gharana, a school of music known for its traditional performance of khayal. Jasraj presented khayal with some flexibility, adding elements of lighter styles, including the thumri. During the initial stages of his career, he was criticized for incorporating elements from other gharanas into his singing. This borrowing of elements across gharanas has now become more accepted.

Gharanas exclusively related to khayal gaiki can be traced back about two hundred and fifty years when this emerging form of gaiki gradually started replacing the major genre of dharupad.

One of the earliest exponents of this emerging form was Sultan Hussain Sharqi Jaunpuri It was popularized by Niamat Khan Sadarung in the durbar of Muhammad Shah Rangeela, in the middle of the eighteenth century.

Subsequently, the two major gharanas that evolved were Gwalior and Delhi. Barre Muhammad Khan of Reva’s contributions were creatively worked upon by Haddu Khan and Hassu. In Delhi, Mian Achpalji was responsible for tutoring the legendary Taan Rus Khan.

Mewati, a young gharana was made famous by Jasraj as he incorporated bhajans and other quasi-religious forms and evolved a genre which came to be called Haveli Sangeet.

His legacy includes memorable performances of classical and semi-classical vocal music, classical and devotional music, albums and film soundtracks, innovations in various genres including Haveli Sangeet and popularizing the Mewati Gharana. Pandit Jasraj taught music to amateurs as well as professionals in India, Europe, Canada and the United States. Some of his disciples, such as violinist Kala Ramnath and vocalist Sanjeev Abhyankar, are highly successful accomplished musicians in their own right.

He passed away on August 17.