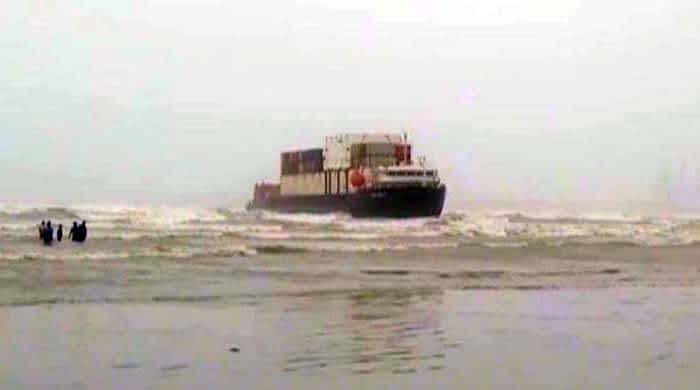 Five days ago, a ship, loaded with containers, came ashore due to high waves and got stuck at Karachi’s Sea view due to a weak engine.

The ship will finally be recused on the fifth day after Karachi Port Trust’s (KPT) refusal to salvage the ship from shallow waters, citing an inability to do so.

Ali Zaidi, who is currently quarantined due to COVID-19, took to Twitter to share that a 200-meter floatation boom was deployed along the starboard side of the ship. According to the federal minister, arrangements have also been made to avoid oil spillage from the ship.

He shared that the KPT Marine Pollution Control and port security personnel were deployed on site 24 hours a day to avoid oil spillage.

Zaidi disclosed that the ship’s captain did not call for help and further commented that a committee to investigate the matter had been formed.

The federal minister says he is adamant to find out who was responsible for the incident.

“This is Imran Khan’s government. I have been indicated from day one that we will not allow anyone to take illegal advantage of our ports,” the tweet read.

The tweet also shared a notification by the Ministry of Maritime affairs for the formation of a fact-finding committee to investigate the incident.