Residency and after | Art & Culture | thenews.com.pk 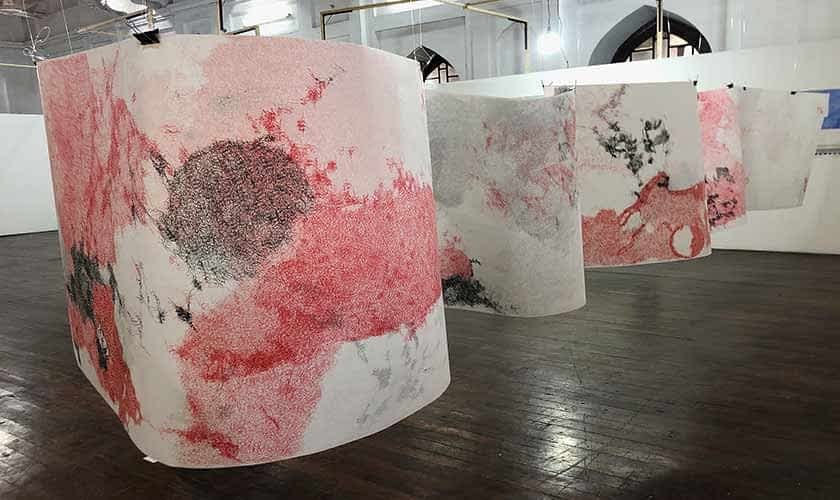 Being in a residency is perhaps not different from being at a university. At an institution of higher education, you are not expected to be a student for a limited duration, but a seeker of knowledge 24/7. Ideally, a graduating student lives on campus; spends hours in the library, attends lectures, seminars, conferences; discusses academic matters with fellow students; and produces a piece of research in close liaison with tutors, peers and the place.

At an artists’ residency, the phenomenon is same, though details vary. Here, instead of a structured learning programme, a participant follows personal pace, private vision, and creates work in relation to other artists, organisers/curators, and the site. Universities and colleges around the world invite writers/artists in residence, a presence that benefits the person as well as students and fellow professionals.

Recently displayed works from the Karbath Artist Residency Programme at the College of Art and Design, University of the Punjab, Lahore (February 16-26, 2021), reminded viewers of the connection between a seat of knowledge and a venue for artistic pursuit. Just the fact that it was founded by Dr Sumera Jawad, principal of the College of Art and Design, and included seven graduates from different art institutes, reaffirmed how the university and the residency, can both contribute in the development of a young person, by employing separate strategies.

All seven participants (of its 3rd edition, called The Third Tide) stayed in Karbath (a locality with farm houses near Lahore) for two weeks, interacted with each other and with villagers, got inspired from living there and created works that responded to people and animals in the area. Each artist took a personal route to reach Karbath in his/her art. When an artist arrives at a new place, he/she does not get the outside reality as a combination of hard facts, scientific truths or statistical data, but treats it like a football ground with the opposite teams playing the same game.

The subjective and the objective blended in a number of works from the Residency, including a mixed media on paper by Sohaina J Elia. Picking plants from the surroundings, she placed them with layers of multiple washes, printing, and sensitive drawings of leaves. What you see in the huge gallery space is a piece of land that has not gone through the concrete revolution, housing schemes and progress by the proliferation of tarmac, steel, pollution and noise.

Another participant, Tehreem Saleem responded to nature differently. Talking about “quixotic body and fat shaming”, she depicted “women with bodies that don’t conform to societal prospects of thinness”. Being at Karbath allowed her “to stay connected with nature” thus in her works, inflated bodies, next to lines of leaves and branches, survived as ‘perfectly’ as the eternal nature. Marks, which mapped contours of flesh and outlines of vegetation in Saleem’s works, emerged poetic and hermeneutical in a large, long piece of paper by Isra Noman. The suspended scroll had small expressive, energetic, strokes in black and red, which like a Chinese painting – echoed a vast stretch of landscape. Drawn from memory; more from emotion, from “liberation and with vigour”. The ambitious scale and script-like handling of visual information, led to a walk through the twirl of the installed sheet; almost like taking turns in the alleys of Karbath.

Saif Ali Siddiqui drew images of houses, tombs from a distant city, Bahawalpur. In a simplified and stylised manner, he created the lifeless scenario of a land. Javed Iqbal Mughal, rendered views of an imaginary scenario, the film world. In collaboration with his teacher, the cinema board artist Ustad Haji Ajmal, he painted manageable hoardings of a Lollywood movie, something that can be associated with the Residency site, since in small towns and villages you come across these advertisements of our entertainment industry.

Another situation, where life takes a grim detour, was documented in Irtabatul Hassan Cheema’s work. In his stunning and heart wrenching video, Cheema recorded a dead dog amid some refuse swirling in a water passage. Even though the video installation was in a loop, each new contact with the body of the lifeless animal flipping in the dirty water sends to your spine unpleasant messages. The work convincingly, unearthed a different façade of ‘beautiful’ nature.

Once you are removed from nature, nature haunts you. Fahim Tufail responded to nature with a formal clarity. He photographed scenes of Karbath, framed them in different sizes, covered them in bubble sheets, and on a few wrote addresses, directions. A customary visitor, initially, guessed that the works were still in their packing, till it dawned on them (or the artist or Amna Yaseen, the gallery curator told them) that this is the work. Tufail, a former student of textile design managed to convey a profound message using a simple material.

Segments of nature, trees, waterways, fields, clouds, the bright sky were all ‘partially’ concealed in plastic, the material used for transporting art to other addresses. The work reminded us how nature is choked – the recent fog or smog in Lahore being an example – and blinded. It also hinted at the entire practice of using pastoral backdrop for the art elite of cities. The works, in their quixotic tone address the attitude of artists travelling to a rural place (Karbath in this instance, but several other residencies also prefer semi urban locations for various – practical reasons). These photographs, could also be understood as reminiscent of tourist snapshots of exotic lands. In a way, for an artist coming from Lahore, a village – even one located only a few kilometres from the centre of the city – is another country. Tufail’s idea to package them into an industrial material suggests how nature is parted, packed, and posted for various usages. It reminding viewers of a passage from Gabriel Garcia Marquez’s novel The Autumn of the Patriarch, in which the dictator sells a portion of the sea to a foreign power.

Rising to a grand narrative of environmental crisis, Tufail’s work also comments upon the entire chain of production and consumption. Crops once grown in rural lands, are gathered and sent to cities to be consumed by citizen living in brick and mortar houses. The same way art work – a landscape – is produced, packaged and put at a gallery space far from its original site.

How we look at this work, and how far we can see through the layers of plastic, is a question, posed by Fahim Tufail in particular, and Karbath Residency in general.