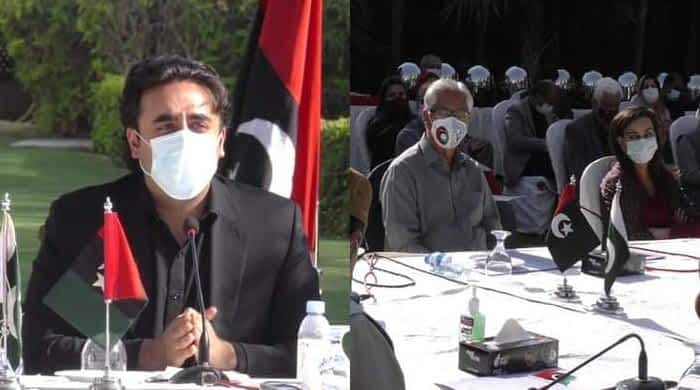 Legal experts on Tuesday told the PPP Central Executive Committee that early resignations may provide the government room to revoke the 18th Amendment, among other “democratic laws”.

“Maulana Fazlur Rehman did not attend Benazir Bhutto’s death anniversary due to local politics,” the leaders said at the meeting, according to sources.

The CEC noted that Fazl did not attend the former prime minister’s death anniversary, but wants PPP lawmakers to resign from assemblies at his call, sources added.

According to the sources, legal experts said that the Opposition lawmakers’ resignations would not affect the Senate elections.

The legal experts told the CEC that in the event the lawmakers were to resign, the future course of action is unclear.

“PPP will not follow anyone’s dictation,” it was said during the meeting. “We cannot become the new PNA (Pakistan National Alliance).”

Today’s decisions will impact PPP’s future relations with the 11-party Opposition alliance, PDM, whose members have pledged to resign from the assemblies and hold a long march to oust Prime Minister Imran Khan’s government.

PDM’s next meeting is on Friday (January 1) at Jati Umrah in Lahore where it is expected the alliance will discuss details relating to its future strategy, resignations from assemblies and the long march.

Well placed sources within the PDM told The News that all eyes are on these two meetings this week as they are expected to determine the future course of the movement against the government.

PML-N and JUI-F, the sources said, are on the same page on the issue of the Senate and by-elections.

The majority of parties that are part of the PDM are standing by the PML-N’s position of resigning from the assemblies. PDM chief Maulana Fazl has yet to discuss the subject with Nawaz Sharif, according to sources.

It is likely that Nawaz will consult PPP’s Asif Ali Zardari to “save the PDM from any harm that could possibly inflict if the component parties take divergent views publicly on important issues like Senate polls and by-elections”, confirmed sources.

The PDM will clarify its strategy without calling off the resignations option, said sources.

On the other hand, sources within the PPP said Bilawal Bhutto-Zardari hasn’t made up his mind yet on whether or not he will attend the Lahore meeting.

All other party heads have confirmed their attendance for the PDM’s Friday meeting.

Hong Kong to ban flights from UK from Dec 22