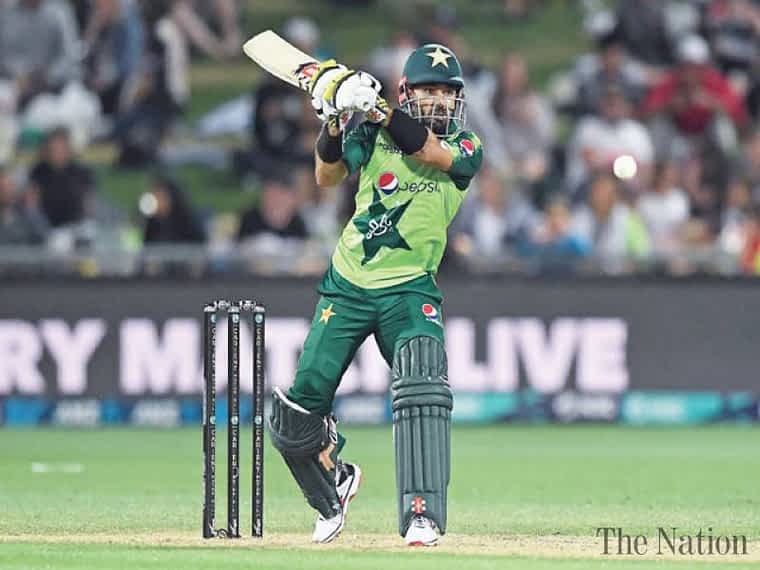 NAPIER-Faheem Ashraf’s haul of 3/20 helped keep New Zealand down to 173/7 before Mohammad Rizwan engineered the chase with a sublime 59-ball 89 in the third T20I in Napier.

Rizwan was dismissed for his career-best score in the final over of the innings, as he miscued an attempted heave off Kyle Jamieson, but his efforts were not to go in vain as Iftikhar Ahmed pulled one for six over deep mid-wicket to close the game out with just two balls remaining.

Earlier, Rizwan and Mohammad Hafeez constructed a fine 72-run partnership for the second wicket, which put Pakistan in a great position. Both batsmen began in a more calculated manner and cashed in on scoring opportunities later. They were particularly impressive in how they attacked the fast bowlers through the on-side. Hafeez equalled Shoaib Malik as Pakistan’s leading run-scorer in T20I cricket before he was dismissed for 41 by Scott Kuggeleijn. New Zealand would have hoped to pull things back thereafter, but Rizwan kept his composure and continued attacking poor balls.

He and Khushdil Shah took the 16th over of the innings, bowled by Kuggeleijn, for 17 runs. Khushdil was caught in the deep the next over off Jimmy Neesham’s bowling, but the over still yielded 13 runs as Rizwan struck a six over square-leg. By the end of the 18th over, Pakistan needed only 11 more runs. But they suffered another jitter with Tim Southee removing Faheem Ashraf and Shadab Khan in successive deliveries, but a boundary from Iftikhar helped ease the pressure.

Earlier, New Zealand got off to a promising start with the openers adding 40 within five overs. Tim Seifert, in particular, looked to be in great form. But Pakistan pulled things back after Haris Rauf had Martin Guptill caught at mid-off for 19. Ashraf bowled a good mix of cutters on a pitch that seemed to hold up occasionally. He had Kane Williamson chopping on for one and then dismissed Seifert for 35 off 20 balls.

New Zealand recovered from 58/3 through a steadying 51-run partnership between Conway and Glenn Phillips (31 off 20), but Shaheen Afridi did Phillips in with a slower one before the batsman could do too much damage. With Phillips back in the hut, Pakistan would’ve fancied their chances of keeping New Zealand down to 160, but Conway batted superbly. He found the boundary with increasing regularity.

Neesham became Ashraf’s third wicket, falling for just two, but Kuggeleijn helped provide late impetus alongside Conway with a six-ball 14. In the end though, Pakistan held their nerve to chase down the target, although the Black Caps ended as 2-1 series winners.  The two teams next meet in the first of two ICC World Test Championship matches starting on Boxing Day in Tauranga.

Tim Southee not out 6

Kyle Jamieson not out 0

Iftikhar Ahmed not out 14

Hussain Talat not out 0