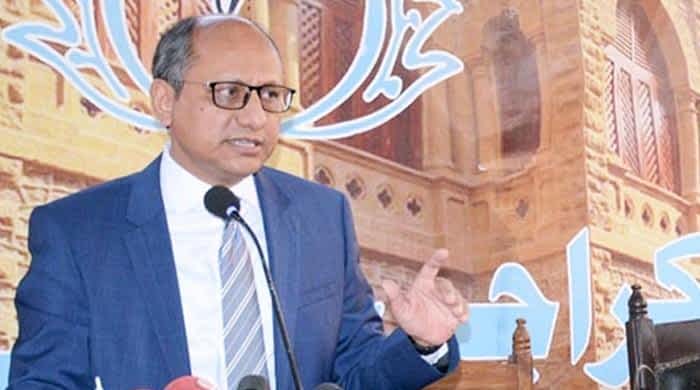 Provincial Minister for Education Saeed Ghani talking to members of the Press Club during visit at Karachi Press Club. — APP/File

“The news of educational institutions closing on March 15 are baseless,” he said in a statement, following Federal Minister for Education Minister Shafqat Mehmood’s announcement of schools’ closure in several cities across Pakistan.

The minister said the National Command and Operations Centre (NCOC), in its meeting today, overviewed the country’s coronavirus situation.

At this time, the positivity ratio in Punjab’s seven cities and Peshawar have risen, as a result, educational institutions will close over there for 15 days — spring break.

“The coronavirus situation in the province is under control …. we had reopened educational institutions on February 1 after consultations in the steering committee — and even then, the attendance was restricted to 50%,” he said.

Earlier, Mehmood had announced the closure of schools in several cities from Monday, March 15, following a spike in coronavirus cases.

Speaking to the media after a meeting at the NCOC, the federal minister said educational institutes would be closed in Islamabad and other Punjab cities from Monday for two weeks.

Moreover, the Special Assistant to the Prime Minister on Health Dr Faisal Sultan said a decision had also been taken to extend a ban on indoor activities and reimpose the 50% work-from-home policy. The implementation of the work-from-home policy has been left to the discretion of the provinces but will go into effect in Islamabad immediately.

Markets across Punjab to be closed by 6 PM: CM Buzdar