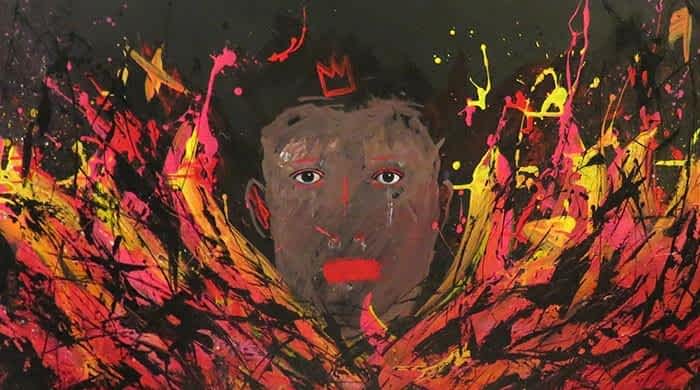 Karachiites witnessed a brief collection of the voices, images, colours, symbols, energies and situations that have emerged out of the abyss so far; a glimpse of what Abdullah Ahmed Khan aka Sanki King carries inside him in a solo exhibition titled ‘Inside Me’ at Artchowk Gallery, Karachi.

“I create art not because I see it as a profession or something that I do for a living and I am also not trying to achieve anything; I am cursed and blessed with an uncontrollable urge to create which at this point of my life I can physically feel inside me just like I can feel my tongue in my mouth; I create art out of an inner necessity,” explained graffiti artist Sanki King.

Over three years in the making; this show was inspired by a drawing that he made in late 2010 which he titled ‘Inside Me’. “Right before I produced the drawing I was going through a lot, both emotionally and mentally; one day I felt a debilitating burst of energy inside of me, as if something on the inside was pushing to come out and I, in a trance like state, started drawing immediately and after three days, as if waking up from a dream, I had the finished drawing in front of me.

“It felt like the creative forces inside of me had used my body as a vehicle, as a tool, to find their way out and express themselves. The therapeutic and cathartic effect that that experience had on me has stayed with me since then; it opened new doors in my consciousness and strengthened the bridge between my inner world and my artistic expression which has only continued to grow stronger to bear heavier loads year after year.”

The current artworks are the result of constant experimentation, pushing the boundaries of the artist’s vision and skills, conversations and battles with his inner demons, fighting against the fragility of his human body, constantly journeying into his inner abyss and consciously letting the forces inside him, use him as a vehicle to express themselves every time he feels an inner situation wants to come out and reveal itself.”

Various stylized forms and colours were used to express his view point in the paintings. He gave shape to thoughts, emotions, feelings, ideas and beliefs.

Each of the work was painted with several layers, and one takes time to understand and find the message hidden under layers. These layers gave his work three-dimensional appearance. With strong gestured strokes and bold illuminating colours he highlighted his works by various scribbled messages in different languages creating vivacious and unique impressions on the canvases and walls. By using ‘Calligraffiti’ he inter mingles the words and expressions thus producing works of art that promote hope and peace.

He was trying to prove that understanding oneself and other also is not easy. “We must let go of all judgments and (try to) go deeper into ourselves/others, in order to understand who we/they really are, instead of believing what we “think” we/they are, in order to grow intellectually and spiritually”, he stated.

All of his paintings touched social and personal themes. He believes that darkness is the absence of light, and the parts of our soul that we give our conscious attention or our ‘light’ to, only those parts become visible, everything else is covered in a mysterious darkness; our existence is a mystery, and our mind and soul are a mystery.

Titled ‘Frozen’ the work have geometrical composition and inter linked just like as a jigsaw puzzle. Other paintings titled ‘I am fine’, ‘Inner Bloom’, ‘Rage’, ‘No Regrets’ ‘Fashioned by Sorrow’, ‘Lies’, ‘Secrets’, ‘Helplessness’, ‘Judgments’, and ‘Self-doubt’ were some of the finest painting at the show.

'We always want to respect the artist’s wishes'

Karachi to remain among most polluted cities of world