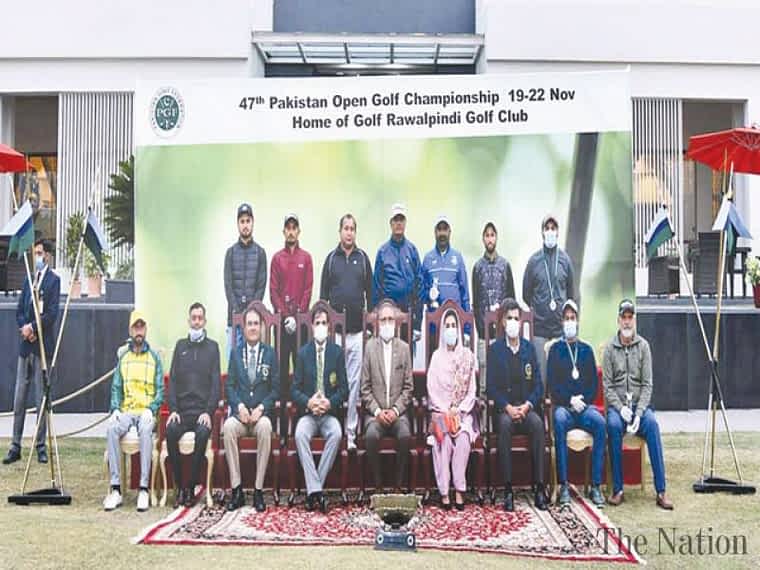 According to PGF spokesman, Shabbir showed ample intensity and sparkle in this title bearing premier event of the National Golf Calendar to surface as Pakistan open champion for 2020-21, seizing the national title for the fifth time. He was the man of eminence at the closing 18th hole on the final day, where he was virtuous enough to embrace his 21-year-old young opponent Ahmed Baig of PAF Skyview Golf Club complimenting him for ending up the championship as runner-up. The four rounds scores achieved by Shabbir were 71, 72, 73 and a remarkable 67 in the final round with aggregate score of 283, five under par.

The scores of Ahmed were 70, 70, 76 and a 70 in the fourth round, aggregate being 286, two under par. The third position was secured by Muhammad Munir of Rawalpindi Golf Club through four rounds scores 77, 71, 70 and 69 with an aggregate of 287, one under par. The comment from the winner was heartening. “Young Ahmed Baig possesses all the traits of a champion and though I have won, I feel sorry for my young rival and hope this experience will add to his maturity and bring rewards and dividends for him in future,” said Shabbir.

In senior professional category, Nisar Hussain (PAF) secured first position, Zulfiqar Ali (Multan) second, M Akram (Gym) third and Raja Iftikhar Hussain (Rawalpindi) fourth position. The best junior professional of this championship was Abdul Wadood of Multan while Faizan Ali of Lahore Garrison earned second and Ishfaq Ahmed of Multan third position. The best amateur of the championship was M Umer Khokher as his scores for the four rounds being 76, 70, 72 and 74, the aggregate score being 292. The second gross prize in amateur category was won by Salman Jehangir of Lahore Gymkhana with an aggregate of 299.

At the conclusion of the championship, Dr Arif Alvi, President of Islamic Republic of Pakistan, awarded prizes to the winners in the presence of IPC Minister Dr Fehmida Mirza, PGF President Lt Gen (r) M Hilal Hussain, officials of PGF, Rawalpindi Golf Club and a large number of golfers. The prize money for the Pakistan Open was Rs 5 million as the winner received Rs 570,000, runner-up Rs 371, 250, third position achiever Rs 232,500 plus while the remaining 47 position holders also collected prizes in accordance with an approved format.

Gas companies request Ogra to increase tariff by up to 122.5 per cent

Procurement of COVID-19 vaccines will take some time: Asad Umar