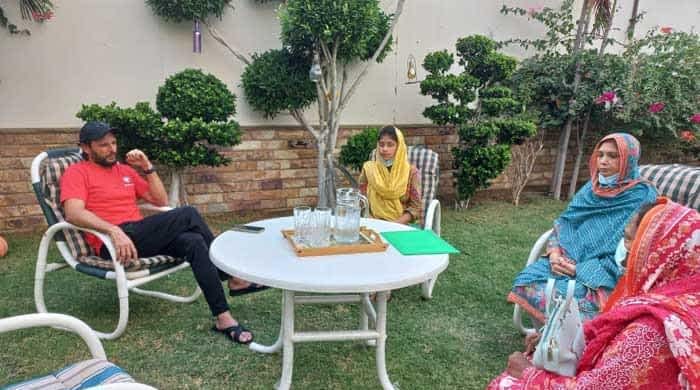 Former Pakistan captain Shahid Afridi has urged Prime Minister Imran Khan to provide compensation to the relatives of those who died in the PK-8303 air crash.

The swashbuckling all-rounder posted a tweet in which he can be seen meeting relatives of the victims of the tragic plane crash.

“Families of the victims of PIA 8303 plane crash are already bearing the loss of their loved ones. Not clearing the dues furthermore exacerbates their situation,” wrote Afridi.

“Requesting Arshad Malik, @Official_PIA @ImranKhanPTI to look into this matter & to help alleviate their pain,” he added.

More than a year has passed since the tragic crash of PIA flight PK-8303 in Karachi, which killed 97 people on board while two passengers had survived miraculously.

On May 22, 2020, the PIA plane crashed into a residential area near Model Colony in Karachi’s Malir neighbourhood after losing its engines. The PK-8303 tragedy has become the third most-catastrophic aviation disaster in the country’s history.

During the ill-fated flight, the pilots made a first landing attempt and the plane briefly touched the ground multiple times, before attempting to land for a second time.

The report had stated that the cause of the crash was not a malfunction in the plane, but due to the negligence of the pilots and air traffic controllers.

A month after the crash, Federal Minister for Aviation Ghulam Sarwar Khan had presented the interim investigation report on the PIA plane crash in the National Assembly.

Sarwar said that the conversation between the pilot and the air traffic controllers had been recorded and he had heard it himself.

Sarwar said that the initial report pointed out that there was no technical fault with the aircraft and even the pilot had said the same in his conversation with the air traffic controllers.