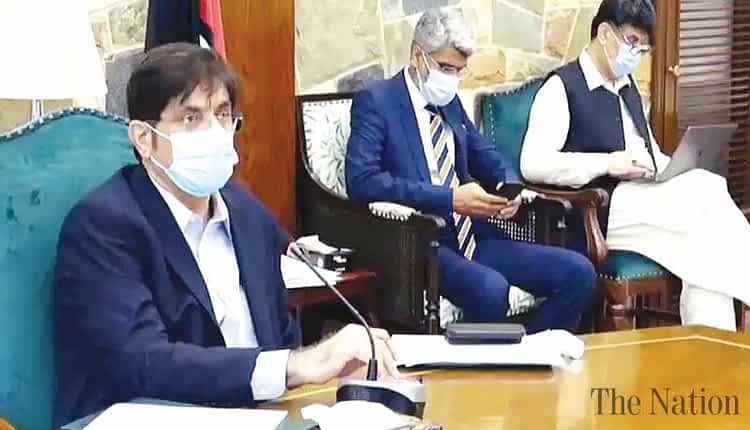 KARACHI   –  As the restrictions were enhanced across Pakistan in the wake of surge in COVID-19, entire Sindh Assembly’s sessions were also likely to be held online for the first time as Treasury and Opposition both agreed to sit together and find mechanism for holding virtual session to minimise the risk to lives of lawmakers, staffers and journalists covering the Assembly.

Soon after Dua (prayer), Speaker Agha Siraj Durrani said that in the wake of surge in COVID-19 cases, it was decided in a meeting led by Chief Minister (CM) Syed Murad Ali Shah and attended by all parliamentary parties that only 20 percent lawmakers of each party would attend the sitting in the assembly hall and the rest could attend online.

The Speaker said that situation was not good in the country and it was turning into a very dangerous state. “We had faced it (COVID-19) in the past and would do so but this is only possible when we follow SOPs,” he added.

Durrani also asked the people sitting in different galleries to leave the house. “Nobody is allowed in the house except officers of finance department who are here to write down suggestions given by lawmakers in their pre-budget speeches,” he said. Muhammad Hussain Khan of MQM-P suggested that the entire session may be held virtually ‘as the situation was very concerning’. He also suggested that the session might also be prorogued, adding that extra ordinary decisions were taken in extra ordinary circumstances. “The session could be summoned once again after the situation comes under control,” he added.

Minister for Parliamentary Affairs Mukesh Kumar Chawla also endorsed the MQM-P’s suggestion and said that his party would not oppose if the entire session was held online. He said that Sindh Assembly was the only legislative house in the country where the lawmakers could attend the sessions virtually.

He said that he would contact all the parliamentary leaders of opposition parties to decide if all members could attend the session online.

PTI’s Parliamentary Leader Bilal Ghaffar suggested to the Speaker that the session should be prorogued instead of holding it online.

Chawla sought time from the Speaker to sit together with all parties to make a decision wit consensus. “Let pre-budget debate start today and we could resume it if the session goes online,” he said. It may be noted here that after the pandemic, the Sindh Assembly members were allowed to attend the sessions online and certain percentage of lawmakers of each party were permitted to come to the Assembly Hall. It would be the first time, if the entire session was held virtually.

Opening the pre-budget debate and discussion on budget execution reports of first and second quarters of current fiscal year, Arsalan Taj of PTI said that Sindh government could only achieve 30 percent of its revenue target while the federal government achieved 42 percent of its target.

“It is quite amazing that the Sindh government’s revenue is getting decreased but its expenditures were getting increased,” he said.

He said that a man who had entered into a plea bargain with National Accountability Bureau (NAB) for his ‘malpractices’ was currently serving as Finance Secretary.

Arsalan suggested to the provincial government to decrease the tax on online services as it was higher in Sindh than other provinces. He also asked the Sindh government to review its services tax if it wanted to enhance its revenue.

Hailing the federal government, the PTI lawmaker said that the Centre had distributed 33 percent amount of Ehsaas Programme in Sindh.

Aijaz Shah Bukhari of PPP mainly criticised the federal government for committing ‘injustices’ to Sindh. “Sindh collects maximum of the total revenues for the country, but gets no electricity, gas and its due share in resources from the Centre,” he lamented.

Adeel Ahmed of PTI criticised the provincial government, saying that it did nothing for people of Sindh.

PPP’s Syed Zulfikar Shah demanded establishment of university and NICVD unit in Mirpurkhas, construction of Sindh-Nala for Sindhri and construction of roads in his constituency.